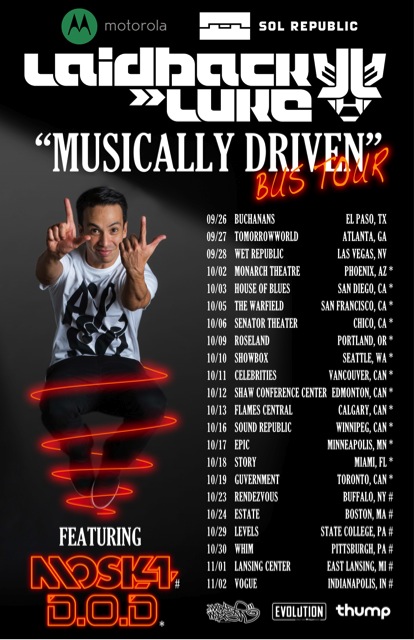 Laidback Luke has announced his ‘Musically Drive’ Fall tour throughout North America in conjuction with SOL REPUBLIC and Motorola with special guests Moska and D.O.D. The bus is loaded with technology, interactive production and visual elements.

Just like his bus tour in 2012, it allows for him to interact with fans in different cities like no other. ‘Hitting the road again, we re not driving on gas, we are musically driven! Taking it to another level this time with a ton of production and hitting areas closer to the fans. It s going to be an insane experience!,’ Laidback Luke says. Laidback Luke may be little, but his production skills and energy makes each one of his sets a not to be missed experience.

‘Musically Driven’ will be hitting Buffalo at the end of October so be sure to check it out before it gets too brisk!