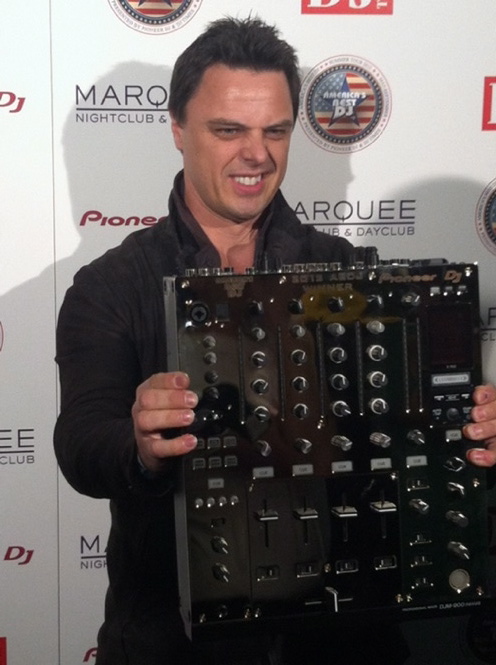 It was a special day in Las Vegas last Sunday. Expressing his gratitude multiple times throughout the evening, America’s Best DJ Markus Schulz accepted the award humbly at the historic El Cortez Hotel in downtown Las Vegas. Known for his dark and dirty techno trance and the stable of disciples being cultivated under his imprint Coldharbour Recordings, Schulz was a deserved recipient of the title. Coincidentally, in tandem timing with the presentation was the inaugural GlowRun, a 5K run to techno, which Schulz said was the coolest event that he had ever seen. To cap off the glittering presentation, sponsor Pioneer gave Schulz a 24K gold DJ turn table – which he promptly lifted over his head in proper victorious fashion.

In his speech Schulz thanked his mom, dad and wife, along with the team he works with and the close friends who came out to Vegas to support him. When asked his favorite spot to spin, he replied with the Avalon Club in Hollywood, where he will be for New Years ‘from when the first person walks in till the last person leaves.’ He compared Vegas clubs to being on par with those in Ibiza, saying the island is the only other place that’s truly about the music and has a unique vibe of its own. In terms of the future, Schulz let on that he has a collaboration with the one and only Armin van Buuren (rumor has it he’s #1 again on the DJ Mag list) and subsequently Schulz plans to hit the studio to work on a few more collaborative tracks.

Upon arriving at the site of the afterparty – megaclub Marquee– Schulz participated in a second award ceremony, followed by a set by #8 US DJ A-Trak, which was enjoyed by all in attendance (especially the #1 DJ himself). Schulz didn’t go weak on his set, playing for nearly two hours, enhanced by a steady stream of visual effects. Moreover, his mom and dad fist pumped to his set throughout the entire night. Nothing better than impressing the parental units.

Special thanks to Dan Cohen & Evan Brookshire for their on location reporting. Follow them on Twitter (@DanCohen4114 @EvanEastonB) if you like LA sunshine and throwing $500 in ones in the air.

Angger Dimas, the young mastermind producer from Indonesia teases us all with his new remix of ‘Levels.’ His last Avicii remix of ‘My Feelings…