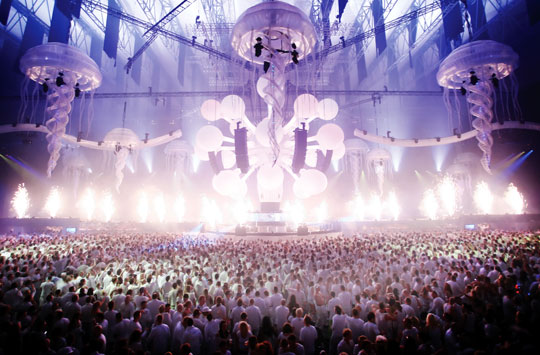 ‘Sensation’, the world’s leading and the most amazing dance music event in the world , has announced its lineup for the ‘Ocean of White’ U.S tour. Following the first show on September 14 at Oracle Arena in Oakland, California ‘Ocean of White’ will be presented on October 5 at MGM Grand Garden Arena in Las Vegas, Nevada, October 12 at AmericanAirlines Arena in Miami, Florida and October 26 at Barclays Center in Brooklyn, New York.

Sensation will bring talent that has been touring with them around the world, including hosts Mr White and MC Gee, Fedde Le Grand, Michael Woods, Nic Fanciulli, Sunnery James & Ryan Marciano, and many more! Sensation offers a ridiculous visual entertainment experience, including 200 different types of pyrotechnics and 22 water fountains all synchronized to the bumping sound of EDM. There will be oversized LED lit jellyfish hanging from the air and sea inspired acrobatics centered on a 236 foot stage. This is one of the most surreal experiences you can ask for in a show, and Barclays Center is the perfect atmosphere for it! You can purchase tickets to any of the destinations here!

I have a very pleasant surprise for all of you. One of my old school buddies, Sal Mercatante, who I haven’t seen in years…