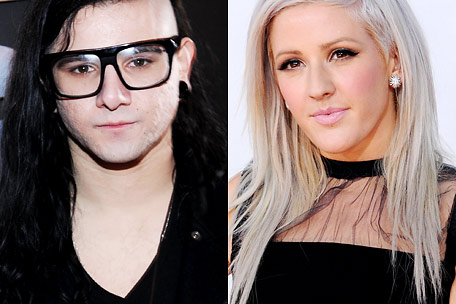 Multiple sources (including NME and Billboard) have confirmed that Skrillex, his girlfriend (Ellie Goulding), Sebastian Ingrosso and Steve Angello were in the studio this weekend in NYC working on a track. Talk about a collab of epic proportions. Ellie’s vocals are unmatched, Skrillex’s dubstep production is undeniably the best in his niche, and Ingrosso and Angello have slowly but surely become two of the most in demand guys in dance music. Interestingly enough, the 2 Swedish House Mafia members were supposedly nervous to work with the couple, but it seems as though the track came out great. Some have hinted that the record will come out on Ellie’s new album, although that is not confirmed. For those who do not know, Steve and Seb have produced together under multiple aliases LONG before Swedish House Mafia came to fruition. Some of the aliases include but are not limited to: Buy Now, General Moders, Outfunk, and Mode Hookers.