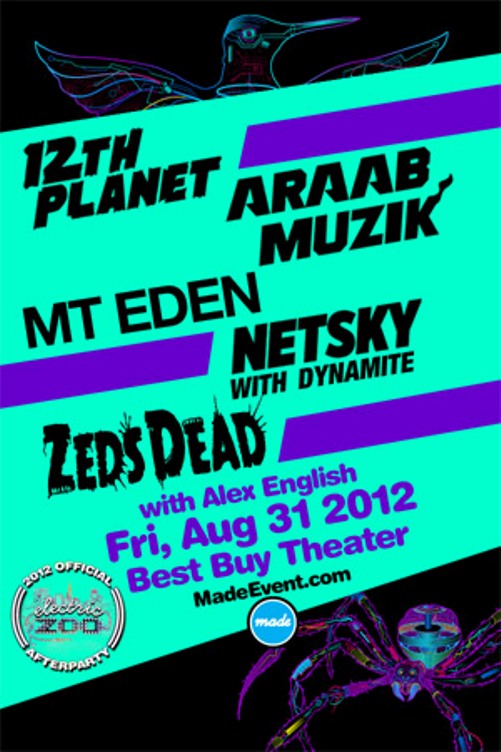 If you like it hard and heavy, then make sure you DONâ€™T miss Fridayâ€™s Official Electric Zoo after party at the Best Buy Theater, featuring 12th Planet, Zedâ€™s Dead, and Netsky. Rarely will you be afforded the opportunity to experience such an eclectic mix of sounds in one night from so many international producers; expect to keep your feet stomping early into the morning with everything from grimey dubstep to funky D&B to glitch-hop.

Although American Father of Dubstep 12th Planet is the most legendary (and yoda master to Skrillex), donâ€™t be surprised if you are equally blow away by Canadians Zedâ€™s Dead, whose genre bending live set is as technically tight as it is loud. And perhaps one of the biggest under the radar DJs for the weekend, Netskyâ€™s liquid funk stylings will surely show everyone why D&B is so popular across the pond. And if that wasnâ€™t enough to convince you to forgo some sleep, New Zealandâ€™s Mt. Eden and American AraabMUZIK will definitely make you regret the fact that you donâ€™t have more of their tracks in your iPod (we know you don’t!)

The EO inbox is constantly flooded with submissions from aspiring DJ/Producer. I try and listen to all of it, but it is hard considering…