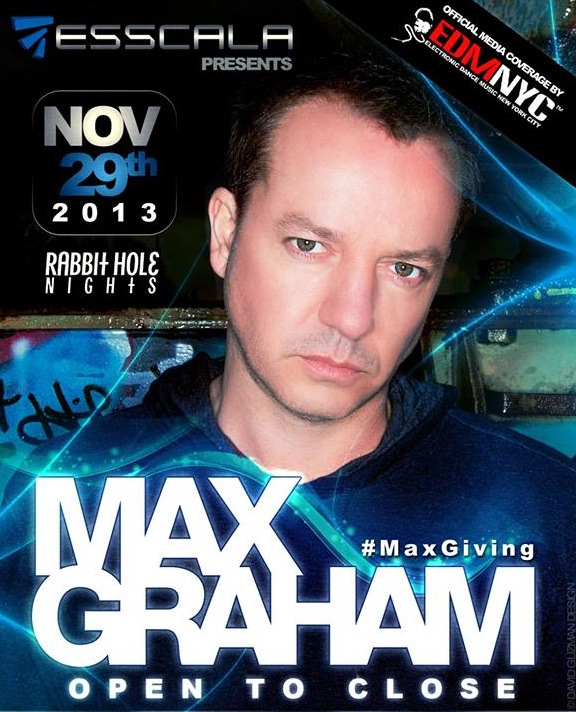 On Friday, November 29th, Max Graham returns to NYC to play his second Esscala Rabbit Hole set at Slake. Set to play from open to close, #MaxGiving will be Graham’s first event since he was announced as an Esscala Resident DJ. The residency entails three extended set performances (5+ hours) at premier NYC venues for Esscala’s ‘Rabbit Hole Nights’ in the next year.

“’Rabbit Hole Nights’ is a journey that traverses multiple genres of Dance music, which in-turn creates a special bond where the music, the artist and the crowd become one…Max Graham was on the top of the list of people we would consider for such an event.” – Zubin Shetty, co-founder of Esscala

In an effort to combat the trend of shorter sets perforating the scene, Shetty and co-founder Rohan Kranti enstated ‘Rabbit Hole Nights’ where the DJ plays for 5+ hours.

Ever since his 6-hour set this past June, Max Graham has felt a strong connection to New York City, which is also the city in which he was first exposed to DJ culture as a teenager.

In anticipation of Friday, take a journey down the Rabbit Hole and re-live Max Graham’s set from this past June. Tickets for #MaxGiving are still available for purchase.

This past Friday, the third installment of the NYC famed Bounce Boat set sail featuring a line up boasting Mysto & Pizzi, signed to…