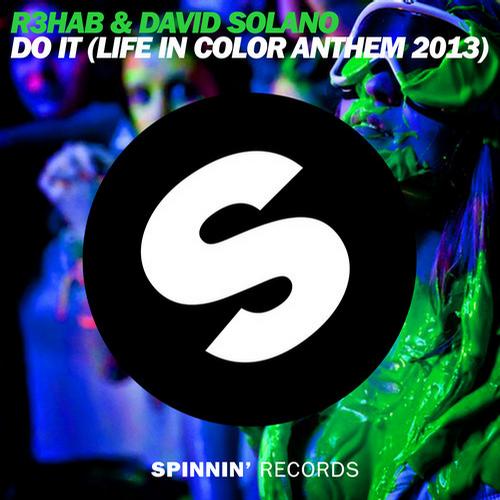 Formerly known as Dayglow, Life In Color is on tour and painting towns neon. Who better to compose an anthem for the madness than Chainsaw Master R3hab and LIC 2013’s official Resident DJ, David Solano? Solano has exploded on the dance scene, and currently is one of the most highly requested new artists in the industry. R3hab, the newly commissioned Hakkasan Las Vegas resident, collaborates for the first time with the prominent Solano to generate ‘Do It’. To start, the track is playful and uplifting. The beat bursts with energy, and creeps up in intensity before allowing an ecstatic release. At a minute and forty seconds in, the gritty takeover is in full effect. From bouncy melodies, to elevating synth work, to essential grinding sections, this track is a perfect union between the two producers’ styles to create an exhilarating electro house track.

Also referred to as the Official Life In Color Anthem, ‘Do It’ would so appropriately be formulated in part by the extraordinary and talented R3hab. After explosive exhibitions during UMF and MMW, R3hab had not slowed down his momentum of production and performance. If you miss R3hab on tour for Life In Color, make it a priority to attend Electric Daisy Carnival New York. If you think his beats are superb through your speakers, you’ll find his live shows phenomenal! DO IT!

Nicky Romero had a monster 2010. It’s without question his breakthrough year, dropping tracks like ‘My Friend‘ , his remixes of ‘Mary Go Wild‘…