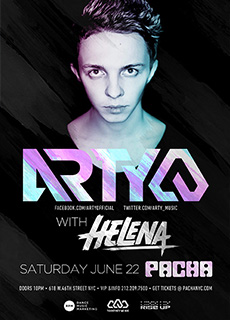 There are no fitting words to describe last night’s show. But we will try.

Arty put on a spectacular performance at Pacha, coming straight from his set at Electric Daisy Carnival the night before. The energy that he brought to the room was indescribable, from the moment he made his presence known around 12:30AM to the moment he turned the decks over to the very capable hands of DJ Helena.

His mixing was impressive and his set was primarily no-holds-barred trance that kept the crowd entirely captivated. There was not a radio-friendly pop remix in sight. The nods he made toward other producers included Porter Robinson’s ‘Language,’ which beautifully complemented the melodic, emotional sound of Arty’s own tracks, and Benny Benassi‘s well-known ‘Satisfaction.’ He dropped his own ‘Kate’ and ‘Zara’ as well as his massive, epic remix of Dirty South & Those Usual Suspects’ ‘Walking Alone.’ Toward the end of the night, he threw some Daft Punk in there with ‘One More Time’ reminding us about the old days of electronic music. It seems the Daft Punk revival is reaching all corners of the EDM world and building up anticipation for what the duo will do next.

Arty has proven that he can not only hold down the decks of Pacha, but that he can completely blow them away with a set that is all his own. Few DJs can match what went down last night in both skill and sheer energy. The young producer can only go up from here to dizzying heights. A live Arty set is an absolute must-see for any EDM fan. To get more of Arty, check out his Together We Are radio show.

For quite some time we heard rumors about a monstrous electro-house remix of Robert Delong’s cult, moombah classic, “Global Concepts.” Our friends told us…