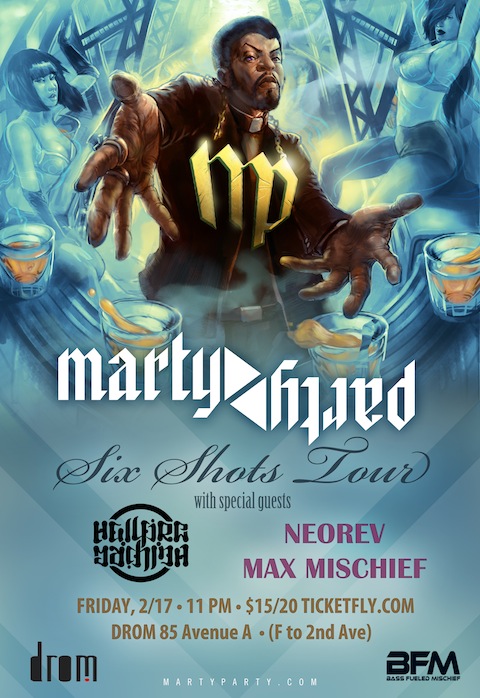 Over the past year, Bass Fueled Mischief have been bringing some of the hugest names in bass to NYC including Chase & Status, Designer Drugs, Flux Pavilion, Doctor P, Zeds Dead, Mt. Eden, Funtcase, etc, and this weekend was no different. On Friday night, BFM brought a SICK lineup (and a huge crowd of sweaty, vibing, bass-loving party animals) to lower east side club Drom. The event sold out a short time after doors opened!

Around 11pm, BFM’s own Max Mischief, and the MC of the night Posi-D, took the stage and really riled up the crowd. The event didn’t even until the wee hours of the morning, closing after 4am with NEOREV.

More after the jump!!

Hellfire Machina took the stage around 12:15am and I was honestly so impressed by this set. Their ability to transition from house, to moombahton, to moombahcore, to ‘brostep’, and finally to dubstep and old school dub/garage was flawless and absolutely incredible. It was especially exciting to hear a DJ play Skream’s ‘Midnight Request Line’, and Benga’s ‘Night (feat. Coki)’, some classic tracks that people really don’t play at shows anymore. (I imagine they were giving us a little preview of an absolutely HUGE show they’re bring to NYC in March. Deets HERE!) They were really able to set the stage for chill, purple sounds of MartyParty.

Around 1:40am, MartyParty took the stage and really got the crowd going. His set was almost 2 hours long, consisting of completely original tracks, remixes, and mashups. A lot of tracks were from his newest full-length album ‘Six Shots of Jameson’. Not a single person could stand still during this set. He dropped some realllyyyyy ridiculous tunes including his purple remix of the Sister Nancy classic ‘Bam Bam’, his mashup of Flux Pavilion’s ‘Bass Cannon’ and Doctor P’s ‘Reasons (Doctor P Remix), and an exclusive purple A$AP Rocky remix he made for the tour. The ‘Six Shots’ Tour has barely even started so if you’re anywhere near one of the coming stops, you definitely shouldn’t miss it!!!

(Sorry of the lack of pictures! We did not have a camera at this event!)

FIXYN – The World Is Ours

On any given day, Electronica Oasis receives somewhere in the neighborhood of 50 to 100 submissions of artists looking to get the word out…