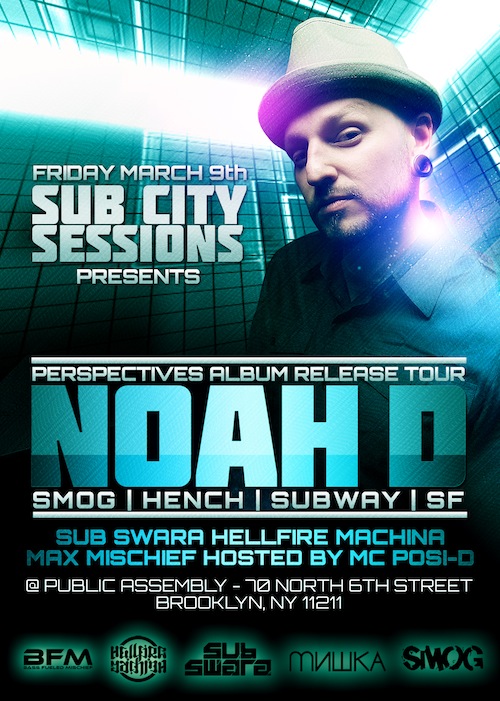 This past friday, BFM:BKLYN and Sub Swara hosted a ridiculous night at Public Assembly in Williamsburg with a crazy line up of Max Mischief, Hellfire Machina, Noah D, and Sub Swara. Bass Fueled Mischief never ceases to impress, as they always live up to their name, and they’re always ALL about the music. (To be honest, I was slightly worried about this show as the venue was pretty empty at the beginning of the night, but it ended up getting PACKED before midnight and stayed that way until the night ended. It was an absolute party.) The night was MC’d by Posi-D, of course, who’s always really fun and is a total crowd-pleaser. (Did anyone else hear him sneak in a Chuck D verse? Haha.)

Full review after the jump!!

Max Mischief opened up the night around 10pm , and played an hour-and-a-half set. This guy is honestly one of the funnest DJs to watch.. he’s got a case of the eternal skank hand (and for good reason too, as his sets are filled with that SUPER dark and swanky UK dub from the likes of Distance, Benton, Mensah, Lost, etc) and knows how to get the crowd dancing. He even came on for a second set between Hellfire Machina and Noah D which was somehow even more ridiculous than the first. When he dropped Skream’s Raw Dogz, the room went absolutely nuts (especially me). Max Mischief is one to watch and he’s doing an exclusive Monday Mix (and interview!) for EO coming up so keep an eye out!

Tom from Hellfire Machina took the stage around 11:30pm and just like his set at DROM (read the review here!) a couple weeks ago, his ability to transition from genre to genre was incredibly impressive. This time, HF started out with some house, into UK funky, garage, and back to dubstep. Hellfire Machina’s also doing a guest mix and interview for EO which will be out the first week of April!

Noah D took the stage around 1:20am and played a super sick set! He played a lot of tracks off his upcoming album ‘Perspective’ (due out April 10th!) which was really exciting. If you haven’t already, you should really check out Noah D. He’s got a healthy balance of West Coast and UK dubstep going on which makes him a really unique producer. (If you’re attending SXSW, you can catch Noah D all week this week!)

(Again, sorry for the lack of pics! Didn’t have a photographer with me! :[ )