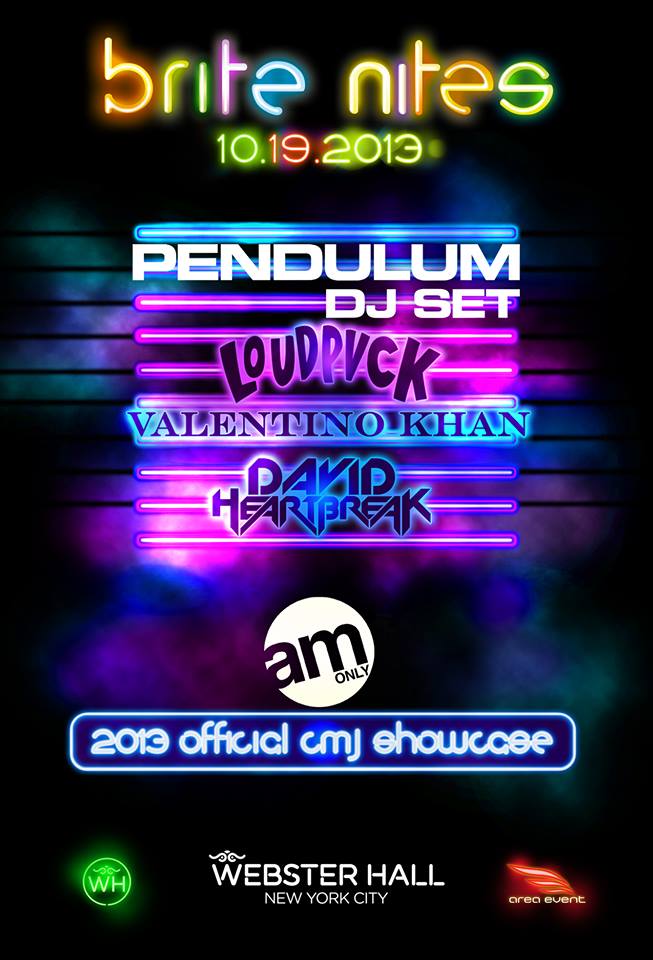 Brite Nites at Webser Hall has become the premier location for the best in dance music. Every Saturday the production and talent gets bigger and bigger at the Grand Ballroom. Two weeks ago Webster Hall had Carnage stop by with surpise guests Tiesto and AraabMuzik. This weekend we saw a monstrous lineup for Webster’s annual CMJ Showcase. There was a little something for everyone this weekend with outstanding performances from David Heartbreak, Valentino Khan, LOUDPVCK, and an unforgettable DJ set from Pendulum.

David Heartbreak was first up playing until about 1 in the morning. The OWLSA producer played tracks off his latest EP ‘The Foundation’ including ‘Acid Youths’. David’s label mate Skrillex has showed this record a lot of love recently by incorporating it into his Dog Blood sets. Heartbreak’s set was full of Trap, Dubstep, and everything else inbetween you’d expect out of a OWSLA producer. LOUDPVCK came on after and Webster gave the two DJs a warm and rowdy welcome. The Los Angeles duo picked up where David Heartbreak left off. For a little over an hour Webster was treated to some of the freshest Trap and Hip-Hop. LOUDPVCK managed to keep the energy in the room booming and at no point did the almost two hours of Trap get stale. Valentino Khan came on to close the night out after Pendulum. Valentino opened his set with the new GTA track ‘The Crowd’ and continued to tear it up until the lights came on.

At about 2 in the morning DJ El Hornet and MC Verse took the stage and absolutely rocked the Grand Ballroom. DJ El Hornet and MC Verse are two of the six members who make up Pendulum. Webster Hall felt noticeably louder even after the hype of Carange’s extra 100,000 watts from the weekend before. MC Verse was on crowd control while EL Hornet played one of the most aggressive sets we’ve been a part of at Webster in a while. Pendulum played some of their own tracks each with a massive response from the crowd. ‘The Vulture’ incited a mosh pit, ‘The Island PT1’ immediately followed by ‘The Island PT2’ sparked an energetic sing along. Pendulum closed with ‘Watercolour’ to whip the dance floor into a frenzy one last time. The hour long set featured primarily drum & bass but did include some Knife Party production for fans of the side project. The huge Knife Party tracks ‘Bonfire’ and ‘LRAD’ had fans of both groups hammering away the worn out dance floor. Pendulum sets are hard to come by but fans of drum & bass should not miss the chance to catch these two in action. Despite missing front man Rob Swire, the performance from El Hornet and MC Verse was outstanding. After this weekend we’re counting down the days until Pendulum’s upcoming 2014 album.

As if I weren’t already literally dying to go to Kazantip, the wild months long rave on the edge of the Black Sea, today…