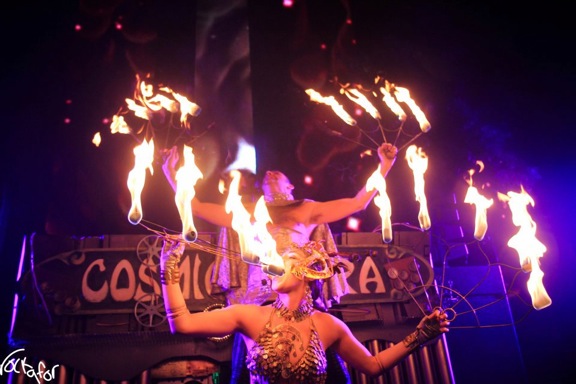 Imagine it’s the weekend before Easter and Passover and you are stuck in NYC…what would you do? For hundreds of dance music lovers, the Thursday before this observant weekend meant praying at the alter of dBerrie, Funkagenda, Zedd and Fedde le Grand at the storied Hammerstein Ballroom for the second installment of Cosmic Opera.

With massive amounts of hype surrounding the first operatic act in February, with headliner Axwell and support from Deniz Koyu and Thomas Gold, creator Justin Cohen sought to maintain the level of expectation steady for the middle chapter of Cosmic. With a recap video that may have smoothed out some of the kinks that actually existed, the bar was set high going into the last Thursday’s show.

With several improvements being made, including the addition of LED light screens behind the DJ booth, additional speakers for increased volume in the gigantic ballroom and a rare 3D laser installment suspended high above the stage, Cohen had clearly worked to respond to naysaying comments stemming from February’s shows asserting that Cosmic Opera just wasn’t as special as he had promised it to be.

Much more review and photos after the jump! 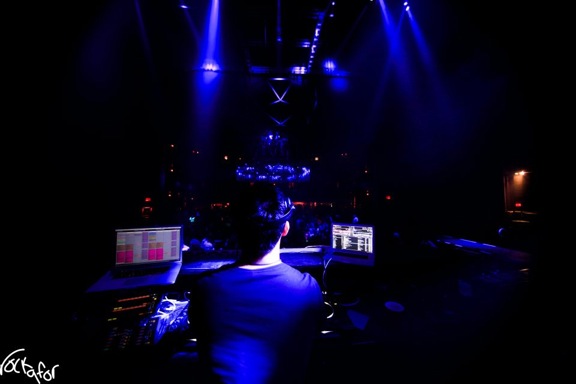 That being said, the line-up on Thursday was simply stellar. New York based DJ and EO favorite dBerrie (David Berrie) opened up the evening to a light but incredibly engaged crowd. Berrie is riding high on the popularity of his bootleg of Gotye – Somebody That I Used To Know, which got major playing time at Ultra Music Festival, including from Deniz Koyu, Sidney Samson and coincidentally, Fedde himself, the question became, who would have the privilege of dropping the mix Thursday night. Berrie certainly executed in his opening set, debuting a private edit of the ubiqutous new tune from Cedric Gervais ‘Molly‘ which implored listeners to “Please help find dBerrie!” In a nod to the progressive hit-master Nicky Romero, Berrie gave love to his remix of the classic Green Velvet – Flash, along with a historical flashback to Prodigy – Smack My Bitch Up.

A somewhat dramatic moment that was newly instituted Thursday was the literal and figurative passing off of a blue lit baton between each performer. The appearance of the wand on stage meant that a change was about to happen, which did create a certain level of anticipation for those who realized what was coming. The wand exchange first took place as Funkagenda waltzed on stage to bestow Berrie with his exit honors as he wound down with his Gotye bootleg.

Funkagenda skillfully displayed his distinctive sound, which is laced with hints of deadmau5 via the repetitive, entrancing melodies. Like the intermezzo in a multi course meal, his set was a lovely mediator between the progressive and minimal choosings of dBerrie and the banging electro that Zedd subsequently provided. Opening with his ‘Levels’ intro, the pace was set through edits of Wolfgang Gartner – MÃ©nage Ã  Trois, a straight forward rendition of Otto Knows – Million Voices and a booty shaking inducing use of Missy Elliott – Lose Control (Acappella). But even for those who were uninitiated to the focused productions of Funkagenda, ‘Drift’ provided a pivotal moment of unity. Full disclosure – since Saturday night the tune has been on heavy repeat at EO headquarters. 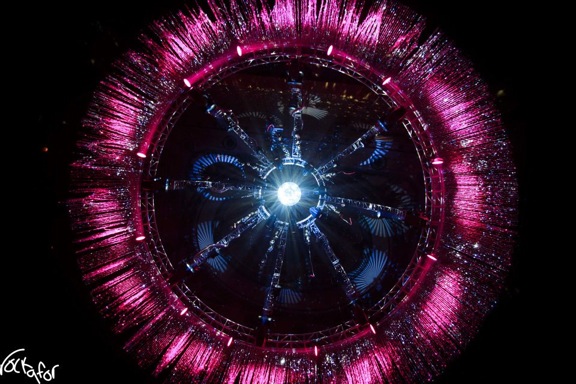 Then the blue baton moseyed its way onto stage, this time via the hands of young electro producer Zedd. Kicking things off with his brilliant remix of Skrillex & The Doors – Breakn’ A Sweat, created as a part of the Re:Generation music project, the energy was held incredibly high for Zedd’s entire set. He followed seamlessly with the almost seizure inducing Dada Life – Kick Out The Epic Motherfucker. His set was a what’s what of the most recognized songs of the moment, perhaps most notably a sequence of Swedish House Mafia – Greyhound (the Miami star) and followed by the beautiful new collaboration from TiÃ«sto and Wolfgang Gartner, ‘We Own The Night.’ All the videogamers in attendance then greatly appreciated Zedd’s play on the Zelda theme ‘The Legend Of Zelda,’ shortly before Zedd closed down his set with his personal bootleg vs. Benny Benassi – Slam The Fuckin’ Cinema. 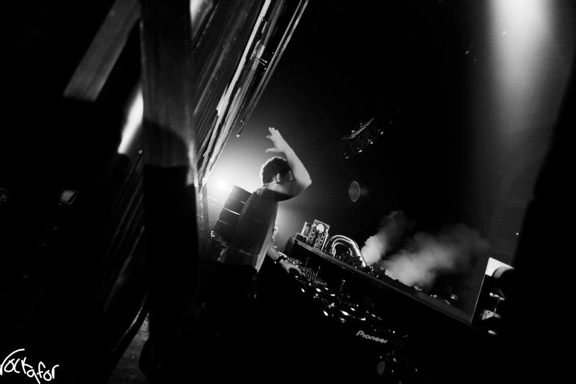 And then, it was time for Fedde le Grand. In parallel with the operatic theme, Fedde engaged in a similar tactic as Thomas Gold in the first act, creating an extremely drawn out and winding lead-in for the Deniz Koyu remix of his epic ‘So Much Love.’ which then became a taste of Martin Solveig – Hello straight into a Fedde favorite, Benny Benassi â€“ House Music. Fedde likes to bend genres in his sets, weaving from house to tech with the the twist of a knob. He put some acid house on display with Nicky Romero’s massive hit ‘Generation 303’ and gave an ode to classic big beat influences with The Chemical Brothers – Hey Boy Hey Girl. A great display of Fedde’s versatility was the live bootleg of his tech house award winning track ‘Metrum’ vs. Booka Shade & M.A.N.D.Y â€“ Body Language vs. Justice vs. Simian â€“ We Are Your Friends (Acappella). Well that’s a mouthful. To answer the earlier question of who had the luck to play dBerrie’s Gotye bootleg, the answer would be – both! Fedde slowed down his set to the now minted progressive staple, inspiring a venue wide singalong.

The key to enjoying Cosmic Opera might be to stop worrying about the production, and focus on the music. Not that many other events have managed to pull such truly impressive acts, especially in quick succession on one stage. The chandelier is lovely, the fire breathers showy and the dancers lithe, but did they really mesh with the music? Not so much. However, what a night for electronic music in New York.

W&W, the dutch duo from the Netherlands release a great single, Alpha. Only having been around for roughly 3 years, they have quickly become…