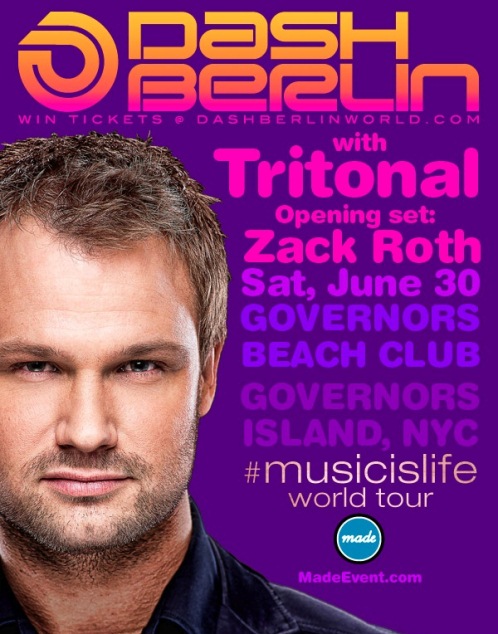 Made Event turned one of NYC’s most festival-like venues into a trance mecca June 30, complete with a breath taking view of the New York City skyline. Simply being on the line to enter saw smiles on everyone’s faces, as they were preparing for uplifting, and euphoric sets from NYC’s own Zack Roth, Tritonal, and of course – Dash Berlin.

Not only did this event already have a fantastic line-up, but rumors ran freely that Dash Berlin would be playing a three hour set – putting the anxiety levels for his time to hit the decks were at an all time high. What better way to open up for Dash? Tritonal! Having seen Dave and Chad several times over the past couple of years, their energy never fails. The dynamic duo has chemistry that is visibly shown in every single one of their sets. From jumping over the CDJ’s into the crowd to just giving each other constant high-fives, it is clear they enjoy what they are doing. In a nutshell, Tritonal did an amazing opening “trouse” set that included many tracks such as the Maison & Dragen remix of Armin’s ‘We Are Here To Make Some Noise’ (Maison & Dragan Remix)” as well as their euphoric ‘Everafter.’ 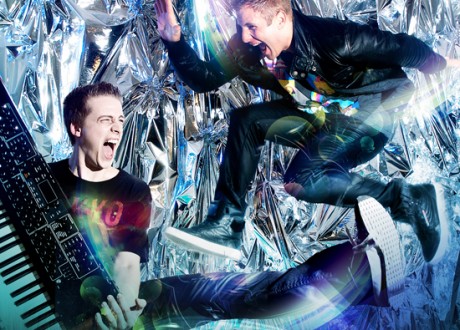 And so it began…Dash hit the decks and the crowd went absolutely wild. Before he even began spinning he stood up, arms fully spread apart and gesturing for the crowd to make noise – and so the crowd did. Sadly, during this 3 hour adventure, there were some tracks that could have been left out (‘In My Mind’ for example) but, that didn’t stop him from giving his fans the trance that they went there for. That being said, there were five tracks dropped that helped mold his set to return to the roots of a classic Dash set.

During the windstorm that occurred on Day 2 of EDC Vegas, Armin went b2b with W&W in the studio where they debuted their remix of the already uplifting, “Waiting.” Without completely revamping the track, W&W put their trademark sound in it with the hard hitting synths. Taking you on a complete roller coaster ride with the soothing voice of Emma Hewitt, leading up to a bass that made the whole island shake.

2.LTN vs. Sander Kleinenberg vs. Qulinez – This Is Ordinary Troll People

What a dashup! Dash dropping this mash-up brought memories back to ASOT550 in Miami, but of course changed the lyrics to “New York.” Guaranteed to make the crowd go nuts no matter the state that is being yelled out because of the mixture of the deep hypnotizing vocals from the legend Kleinenberg’s “This is Miami” into recent uprising duo Qulinez’s “Troll”.

With Sarah Howells soothing voice, this is a Dash remix that every fan wants to belt out when seeing him live and that is exactly what the crowd did.

Throw this track in any set and you will find nothing but smiles on everyone’s faces. Dash was very, very fond of A&B in his latest NY visit and no one had any complaints. From people climbing the tent poles to jumping on the picnic tables – Governor’s Island was serenading NYC while the sun went down.

Closing out his set with a classic Dash remix that left all of his supporters in awe, and not questioning the magnificent set that they had just witnessed. Hands reaching towards the sky or arms wrapped around your neighbor, this track was a defining moment for those who really knew what Dash is about.

Kick ass mixtape for the weekend spun by German-based DJ, Sunny Ventura. This mix includes all the most recent big-time beats including ‘Flirt,’ Sebjak’s…