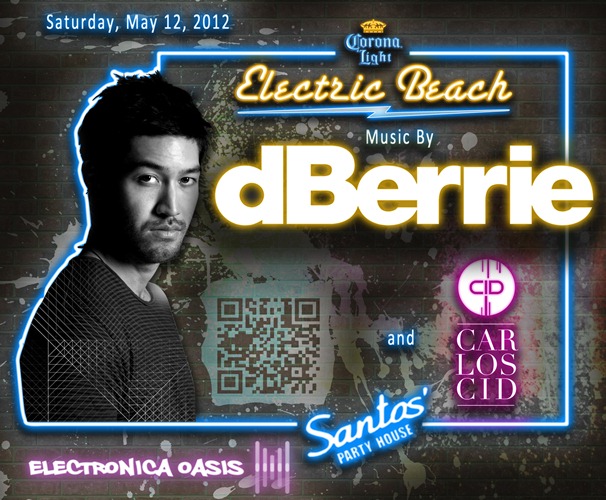 It’s heartening to see both parties and artists ripen like a fine aging wine, finding their footing and gaining the recognition that they deserve. That is exactly what is happening for NYC producer David Berrie, creating music under the progressive moniker of dBerrie, and the recurring Electric Beach event, held at Santos Party House, which dBerrie headlined this past Saturday.

dBerrie has been a production wiz for several years now, but 2012 has been his long over-due thrust into the spotlight. Undoubtedly, his remix of Gotye’s ‘Somebody That I Used To Know‘ has put him on the radars of many of today’s best DJ’s. It has gathered support from Fedde Le Grand, Deniz Koyu, Swanky Tunes and many more. Last time he graced Electric Beach he premiered it. Since then it’s been all hugs and handshakes. Returning this past Saturday, he gave New York City a lot to smile about.

dBerrie – Future Bot vs. Kaskade – Angel On My Shoulder (Acapella)

Some of the highlights of the set that the average house music fan may not have noticed (either due to inebriation or just being unfamiliar) was dBerrie’s mash of Wippenberg’s classic ‘Pong’ versus Russian mafia Refune missile ‘Legend.’ Unique and tasteful, this is one that the DJ will likely keep in his personal arsenal! In addition, many of dBerrie’s new tracks that are in the release pipeline surfaced, including in the video above.

Also, the personalized version of Cedric Gervais’ ‘Molly‘ was certainly a crowd pleaser and perhaps the biggest track of the night. There have also been whispers of dBerrie’s original “Futurebot” being released as an official track by Kaskade himself. Lastly, the cleverly named ‘I’m Tungin’ Home’ made a big statement and demonstrated that the Deniz Koyu original initially supported by the Swedish House Mafia has yet to die, and could likely remain a staple in progressive sets for the remainder of the summer.

dBerrie kept the crowd churning until the wee hours, mixing in pockets of tech house to keep the night rumbling. Electric Beach is developing into a worthy choice for your Saturday fetes, given the saturation of parties in the city these days. With big names such as Pierce Fulton coming up on the docket, definitely check this weekly shindig out soon if you haven’t already.

Coachella is proving to be one of the most talked about music festivals on the internet. From trending on twitter to becoming your parents…