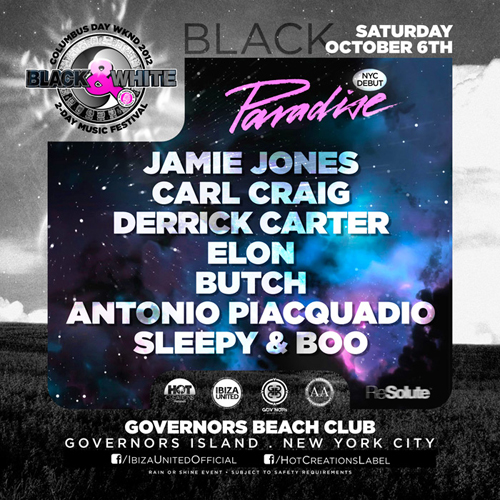 Hot Creations head and disco-house champion Jamie Jones brought his Paradise concept to New York City this past weekend, andÂ  a slew of top-shelf underground talent accompanied him. With last years Black and White festival boasting big talent like Oscar G, Boris, and Avicii, there was certainly a lot to live up to. However, Ibiza United managed to put on a great show and the weather managed to hold up as well. Read on to hear about how the day and night went, and why the deeper names made for a great festival atmosphere! 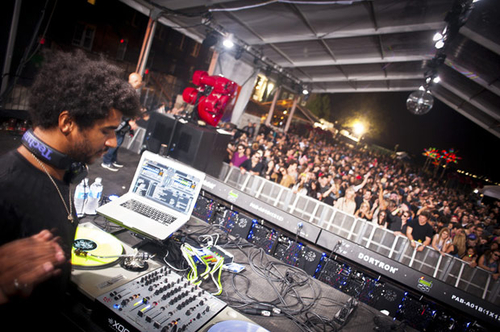 Since the announcement, it was visible by the looks of the constructed line-up that this mini festival residing on the well known Governor’s Island was going to be one for the books. From noon til midnight, the vibe of the crowd coincided so well with the music. Every artist listed on the bill was someone who you knew was going to take us through a musical journey. Beginning the trip with Chicago house legend Derrick Carter who played a tasteful set of classic house, even incorporating Kanye West acapella’s into his set. The man was so comfortable on the decks that he was eating twizzlers while playing to a growing crowd of tech-heads. Next up was the German native Butch, whose rare NYC appearance was the topic of much discussion. Butch’s set was extremely cohesive and well put together, and theÂ picturesqueÂ sunset added to the epic nature of his set. Dropping his classic track “Rawhide” with a perfectly placed Jimi Hendrix acapella seemed to be theÂ highlightÂ of the set. He also dropped a very cool bootleg of “Apache” with Switch’s “A Bit Patchy” that had the crowd going crazy. The set was very wellÂ receivedÂ and hopefully it will give this versatile DJ/Producer a reason to come back to NYC more often.

As night came over Governors Island, Detroit techno innovator Carl Craig played as dark and dirty as possible. His brand of techno is unmatched, and tracks like Loco Dice’s “Definition” complimented the vibe perfectly. He also teased the crowd with a snippet of Eddie Amador’s classic acapella track “House Music”, which demonstrated Carl Craig’s range of song selection. He certainly was in no mood to drop recognizable tracks, and the crowd was extremely receptive anyways. Last was the main act, Jamie Jones. The atmosphere of the island had transitioned from dark and gritty to groovy easing the already eager crowd into the Hot Creations adventure we were about to embark on. Although slated to play a 4 hour exclusive set, the night did not pan out exactly as planned. Regardless, Jamie played incredibly well, perhaps making up for his last NYC visit. Although the new system that was used on premise, Void, gave out a bit towards the end of the set (the sound became muffled with static), Jamie still proved why he was rated #1 on RA’s poll. Playing a few big tracks from the new Hot Waves compilation, along with a slew of originals, Jamie gave the crowd exactly what they wanted. Jamie’s “Tonight in Tokyo” was a noteworthy selection, along with Subb An’s remix of Tiga’s new Crosstown Rebels release “Pleasure From The Bass“. Overall, Day 1 of the Black & White festival was anÂ immenseÂ success, full of great underground vibes and well-constructed sets.

Tiga- Pleasure From The Bass (Subb An Remix)

How To Party At Output Until Monday Morning

You have just raged in the hot, sweaty July sun for two days, trading coveted bottle caps at Governors Beach Club and subsisting on…