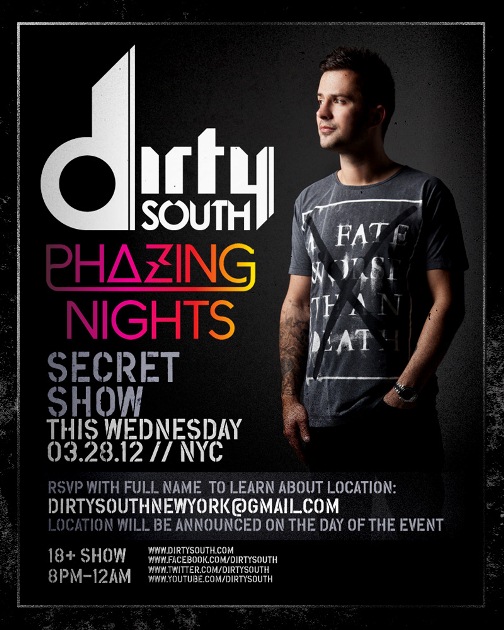 Dragan RoganoviÄ‡, or better known as premiere DJ, Dirty South was kind enough to keep his Phazing Nights going this past Wednesday at Santos Party House and we here at EO weâ€™re lucky enough to be part of it. With an atypical show date & time in an atypical location based on the genre and popularity, Santos Party House had a line that wrapped pretty much around the corner on a long stretch of Lafayette Wednesday evening. The crowd was definitely hyped and it didnâ€™t seem as though many were suffering from post-Ultra brain damage. The outside crowd chanted and slowly but surely a good percentage of the people who showed up were able to cram into a foxhole like room, which was quite tight in comparison to Santos main room, to enjoy the sounds of Dirty South.

FareOH opened the evening with a strong set that the crowd seemed to really take in, and in my honest opinion it seemed just as packed for FarOH as it did when DS took the stage. The people of Santos were ready to get their rage on with Dirty South. To read more about this performance and check out some cool videos and a tracklist from the show, click after the JUMP!

Dirty South stopping through New York City for a secret show was quite a privilege, especially with his immaculate track selection which was similar to his UMF set. Within the dark abyss of the Santos basement, the crowd was ecstatic as soon as DS took the decks and began with some incredible big room progressive monsters like his brand new remix of ‘Devil’s Work’ by Miike Snow, ‘Rise’ by Michael Brun, ‘Feel’ by Third Party and ‘2night’ by Eric Prydz. Along with the many fairly new tracks Dirty South dropped, his compilation of jaw dropping (orÂ clenching?) mash ups blew away the crowd into a dancing, air punching frenzy. His ‘I Love U So’ vs. ‘Bullet’ vs. ‘Promises’ mash up caused many sporadic shouts and dance circles on the floor.


Crowd getting funky with mash up, ‘Cassius â€“ I Love U So vs. Michael Woods â€“ Bullet vs. Nero â€“ Promises (Calvin Harris Remix)’

Dirty South’s variety throughout his set had the crowd energized from shouting the lead from Alesso’s ‘Calling’ to singing along the soothing ‘Sweet Disposition’ acapella to dancing their hineys off to head pounding electro tracks such as Dada Life’s ‘Kick Out The Epic Mother Fucker’ and brand new smasher, ‘Atom’ by Nari & Milani. DS didn’t forget to include a nice blend of his own originals in the mix. He included many remixes and mash ups of his own such as, ‘I’m Coming Home,’ ‘Phazing,’ ‘Alive’ and making sure he closed his set right with ‘Walking Alone’ being stuck in everyones heads for the remainder of the night.

Overall, the crowd brought good vibes along with iPhone strobe apps, neon glasses and light up gloves. Everyone was excited to see their favorite Australian Houseman pick an awesome selection of tunes that the crowd had raged their hearts out to. After many drops; hands exploded in the air, couples kissed, friends jumped and dance battled together and everyone was loving life with Dirty South. There was always a crowd surrounding the booth with their phones, snapping pics/recording videos and supplying high fives for Dragan. He noted on his twitter that his secret party performance was one of his favorites in his career. I think that the crowd can agree with that as well. There was never a moment when you saw Dirty South without a smile on his face from start to finish. The few who had the chance to catch this performance can consider themselves to be a lucky bunch.


Gracing the Crowd with ‘All By Myself’ by Dubvison
A typical moment in the Santos basement
Getting grimy and reaching for heaven during ‘Calling’ and ‘Metropolis’
A taste of madness in the Santos Basement with ‘Raise Your Head’
Finishing his set with an awesome Laurent Becca mash of Dirty South, Arty, Skrillex & Kaskade – Scary Monsters Walking Alone

Time Warp, the long-running German techno institution, is bringing their festival to New York and the phase one line-up has been released! Presale tickets…