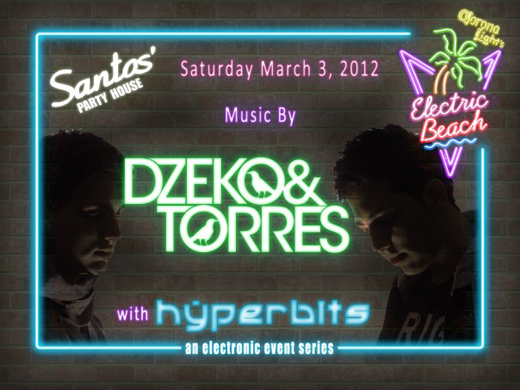 Electric Beach at Santos Party House raged on Saturday night with fantastic opening and closing sets from promising NYC upstarts Hyperbits, and a headlining set from Toronto-based Dzeko and Torres. By 11:15, the venue was completely rammed and buzzing, as it usually is during the successful weekly installment at NYC’s newest premier EDM venue. Robert and Serik of Hyperbits played out their remixes such as Coldplay’s “Clocks” and The Killers “When You Were Young”, as well as their highly supported bootlegs including Wippenberg vs. Kaskade “Move For Pong” and Walden vs. LIGHTS “Brightness Breaks Glass.”
Hyperbits dropping “Mode” by the Bingo Players at the peak of their set.
For more about Dzeko and Torres, hit read more!

This set the stage perfectly for Julian Dzeko and Louis Torres, who came out firing with banger after banger after banger. Notables from the Canadian duo included an incredibly awesome bootleg of Cobra by Hardwell vs Promises by Nero. They also played their new Streesh bootleg which went over awesome. Hyperbits came on for the last 30 minutes and absolutely rocked the place until close. There was even a cameo set by Roberts brother (and subsequent birthday boy) Chris Palliser aka Chz of Electronica Oasis fame. Overall, the night was rocking and completely validated the immense buzz that surrounds both of these young duos.
dzeko & torresElectric Beach PartyHyperbitssantos party house