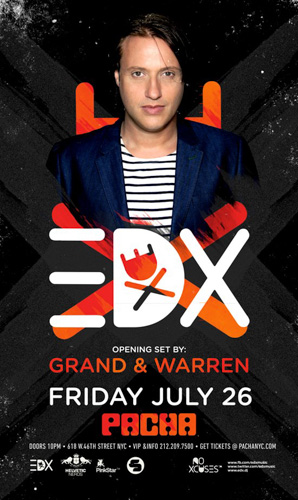 We were invited out for a special night to see DJ duo Grand & Warren open for house master EDX at Pacha this past Friday. Matisse & Sadko also made an appearance before the headlining set.

Early in the night, before the club got packed, we got to hang out in VIP and chat with some of the Grand & Warren team. The two have only been producing music together for about a year, but they already have a lot of momentum going surrounding their popular club appearances and hot electro house singles. Grand & Warren have a lot of talent behind them and are determined to make it big, and they show no signs of stopping. 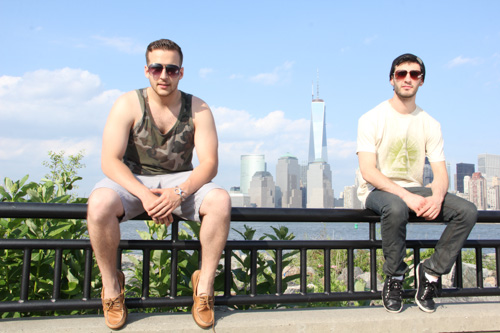 Their opening set was very different from when we saw them close for John Dahlback back in May. By the time 4AM rolls around, only the dedicated clubbers are left standing and its essential to play a set that packs punches and keeps people on their feet. For this opening set, Grand & Warren took a different route and started off with some bumping house more focused on getting people in the mood. DJ Gary Rabbitt was also missing his signature silver mask, but took it out once the club began to fill up. As the crowd grew, the duo dropped a harder electro sound, including their own track ‘Waiting For Aiden,’ until Matisse & Sadko took over.

By this time, Pacha was packed and waiting for the headlining DJ to make an appearance. EDX, whose real name is Maurizio Colella, has been producing electronic music, primarily house, since 1994. EDX is one of those classic talents that is seeing a boom in popularity thanks to the EDM explosion, but unlike other DJs of his caliber and history, he hasn’t compromised his style to suit the mainstream. Pacha is a well-established club that can afford to take risks by featuring up-and-coming producers, but can always fall back to more well-known headliners. Within this environment, EDX crafted a set that was unexpected and never boring as he expertly blended under-the-radar house beats with big room crowd-pleasers like Kaskade’s recent ‘Atmosphere.’ He took command of the main room completely and the crowd loved it.

Mightyfools and Neil Van Gogh rework an old classic in their new track ‘Pullover’. The original, released in 1991, was a classic minimal track…