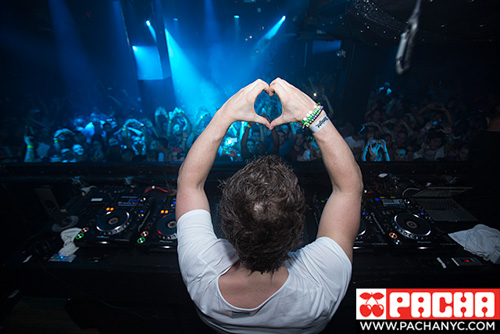 Fedde le Grand and his feel-good house music is no stranger to the Pacha crowd, but he surprised everyone last Friday night by unexpectedly dropping Daft Punk’s much hyped new single “Get Lucky” as his opening track. As soon as the disco-infused intro melody began to leak out of the speakers, it felt like the crowd took a collective double take before realizing what was happening and erupting in deafening cheers, almost overpowering the music itself. With a driving bass line behind it, “Get Lucky” filled every corner of the club and moved everyone to jump up and dance. This brief sampling was a testament to the power of the song and just a hint at what’s to come for Daft Punk as they reenter the pop culture sphere from their long hiatus. 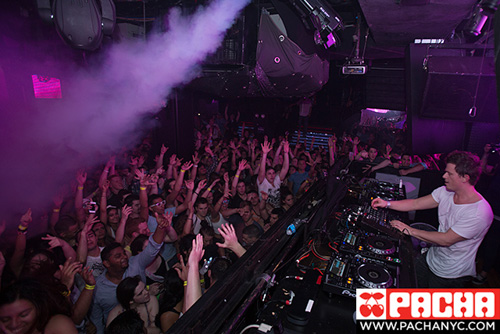 As soon as the song’s energy reached its peak, Fedde moved right into “So Much Love,” his recent single featured on the Ultra Dance 13 compilation. It was a perfect transition and set the mood high for the rest of the night. Not long after that, Fedde sampled the lyrics of another familiar Daft Punk song, “Harder Better Faster Stronger,” over a heavier, clashing electro house sound. 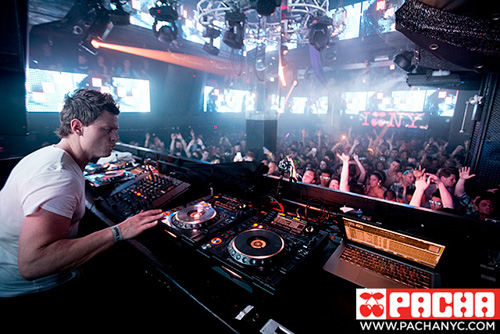 Perhaps Pacha has been influenced by the increasing popularity of experience and entertainment-focused electronic music events, like the carnival atmosphere of Insomniac shows or the recent addition of Cirque du Soleil performers to Light Nightclub in Las Vegas. Whatever their reasons, Pacha stepped up their game on Friday night, featuring a woman who performed aerial acrobatics while hanging from a long piece of silk and a dancer dressed in a dark bodysuit with colorful LEDs outlining a stick figure shape. The aerial performer was breathtaking, spinning and twisting high above the crowd on the main dance floor while the music and lights played. The LED stick figure was slightly creepy, in a fascinating, trippy way, as it danced around and interacted with the crowd, which was momentarily distracted from the DJ set by the stick figure’s appearance on the main staircase. The addition of these performers, as well as the usual Pacha dancers on the balconies, may be the sign of a new phase in nightlife, one that involves more interactive entertainment features to keep people involved, interested, and coming back for that extra spark. 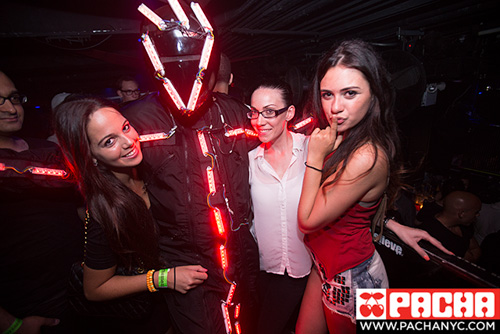 Fedde continued his night playing a remix of Benny Benassi’s classic “Satisfaction” more suited to Pacha’s big room sound. As the night progressed, he dropped tougher electro house tracks, including Showtek’s massive “Slow Down” and Dada Life’s “Kick Out The Epic Motherf**ker,” as well as crowd favorite “Rattle” by the Bingo Players. 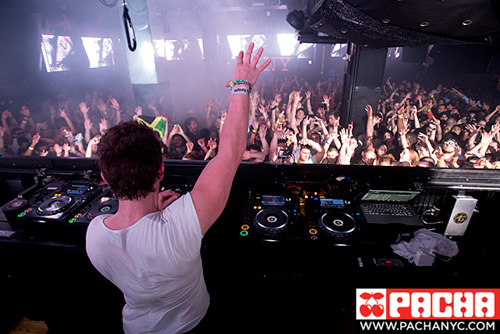 Despite getting off to a spectacular start, by 3AM Fedde was playing well-worn pop-oriented singles by Calvin Harris such as “Sweet Nothings” and “Feel So Close.” The end of his set was a far cry from the spectacular beginning and he still had plenty of his own material he could have drawn from to keep the crowd dancing. Though the energy dipped later in his set, Fedde le Grand remains fully capable of handling a dance floor and pleasing a crowd as large and diverse as Pacha’s.

Starting the week off with some Gina Turner sounds might be the best decision you can make. Here’s a mix she did in preparation…