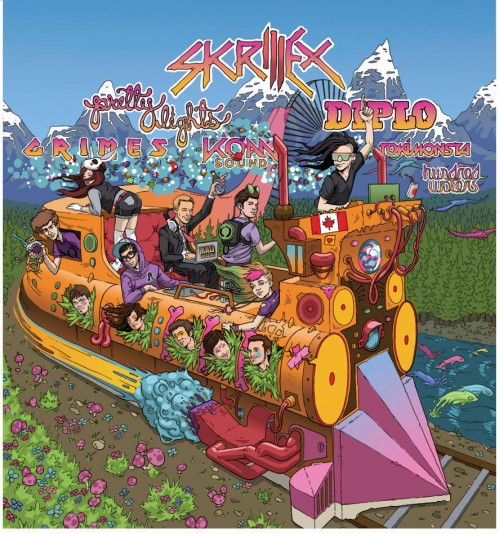 The Full Flex Express Tour kicked off this past weekend, calling all aboard in Toronto and moving across six Canadian cities in just over a week. Joining frontman Skrillex on the tour was an eclectic mix of DJs and producers that donâ€™t seem to fit the bill of any one genre – the trendsetters on the lineup makes the FFE mini-festival even more intriguing (not to mention the Janis Joplin-inspired concept of a train tour itself).

As openers TokiMonsta, Hundred Waters and Koan Sound kicked off on a smaller, nearby stage, the crowd grew in the sweltering heat, migrating to a larger main stage for Grimes to play. While there were technical difficulties during her set, the excitement for the nightâ€™s show trumped any early bumps along the way.

By the time Diplo started, the air had begun to cool and the people were ready to party. The Mad Decent godfather played a massive variety of crowd-favorite EDM, old-school dance and hip-hop classics, all mixed with his own flavor of moombahton, dubstep, and trap. The bounce was unarguably fun and put the spring in the step of every partier – it was the perfect set to close out the daytime party and bring on the nighttime rage.

httpv://www.youtube.com/watch?v=S2fz0_tyUjg
Pretty Lights took the stage next with his trademark sound of electro-soul hip hop groove, calling out every member of the crowd to project their diaphragms for tracks like â€œFinally Movingâ€ and the Chicago Bulls Theme Remix. As the first time Pretty Lightsâ€™ current production has made it north of the border, the time slot was the only weakness of his performance – the dusk lighting gave a less-than-perfect backdrop for the spectrum light show Pretty Lights puts on. By the end of the set, the combination of darkness and his finale of â€œI Know The Truthâ€ was the perfect lead-in for the main act.
httpv://www.youtube.com/watch?v=FLNq8X45-GQ
After a long lead-in of what seemed to be half of a Bob Marley CD as the stage changed over, Skrillex came out swinging with â€œRight Inâ€. The heaviness continued with a myriad of originals and VIPs, only straying from Skrillex-produced tracks for Dillon Francisâ€™ remix of â€œWho Is Ready To Jumpâ€, SkisMâ€™s â€œLike Thisâ€, and of course banger anthem â€œInternet Friendsâ€. A nearly 40-track set over 90 minutes drew out long, emotive vocals in tracks like his â€œCinemaâ€ remix, â€œKyotoâ€, and â€œPromisesâ€.
httpv://www.youtube.com/watch?v=SQ9IeXcFh6U
With fireworks during â€œBangarangâ€ and the trademark Spaceship rising into the air mid-set, the production hadÂ  effects ready for a festival for a crowd that was smaller than one. Ending with the earth-shattering drumâ€™nâ€™bass version of â€œScary Monsters and Nice Spritesâ€, it is easy to see that Full Flex Express is a coming out party of Skrillex 2.0 – the dominant headliner hand-picking rosters of multi-genre artists to join the party.
httpv://www.youtube.com/watch?v=8UYrvTAlus8
Check out the rest of the tour dates here.
Diplofull flex expressGrimesHundred Waterskoan soundPretty LightsSkrillex

Got plans for friday? If not, enter to win a chance to get free tickets to watch Sunnery & Ryan bombard the Pacha dance…