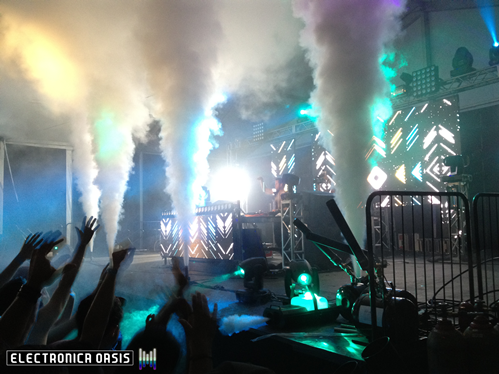 So many things have been made right about the Governors Island summer series since the first shows back in June. Perhaps the ‘rightest’ move has been the absolutely stacked train of performers coming to grace the waterfront stage. Already this summer, amongst many others, Hardwell, Benny Benassi, Tritonal and Dash Berlin have stepped behind the decks, and next weekend brings a pretty legendary two days with John Digweed and Danny Tenaglia on Saturday, Aug. 11 and Thomas Gold and his drum line on Sunday.

This past Saturday, Garuda captain Gareth Emery brought his live show to the island, previously having broadcast performances from Miami and Manchester. Governors shows are unique in their format, bringing multiple DJs together for a marathon day of often diverse and riveting music. Gareth’s ensemble was no different, with support from Ben Gold, Blake Jarrell, Jermone Isma-Ae and Zack Roth. Honestly, if you’re a trance/trouse fan, there was no better way to be spending your Saturday. Being that it was live broadcast, there was no reason to miss it – also see below and read after the jump to catch up on everything that went down.

The sun was just waning for the tail end of Jerome Isma-Ae’s set, which was already seeing a completely packed house. The Governors Island beach is spacious, but the voracious crowds have a way of making one feel a part of the most intimate of raves. Jerome was definitely on a Pryda and friends kick, perhaps an homage to the week before when Eric Prydz came to town, putting on Finnish Fehrplay’s ‘Incognito’ along with the Prydz remixes of ‘Midnight City’ and ‘Personal Jesus.’ The conclusion of his set was certainly leaning towards a darker progressive, transitioning seamlessly from the more euphoric tracks of his choosing.

By the time the Garuda master took his place behind the CDJs, the entire crowd was properly primed for his tenure, which lasted well over two hours. So often in a festival like setting DJs are kept to an unreasonably short amount time with which to display their wares. Opening with an ID track that had every bit of that Garuda flair, perhaps a new one that will be announced soon? From there he was off with a bang, stopping for a return of his new track ‘The Saga‘ and then soon progressed into a personal favorite, Jack Holiday & Mike Candys – Children 2012 (Original Higher Level Mix) then into to Ashley Wallbridge’s brand new remix of Let The Music Play’s ‘All I Can Give You.’ An interesting choice made was the use of Porter Robinson’s edit of ‘Mansion’ and not the original version, which was such a smash hit for Gareth and Ashley. The crowd went wild however, as they also did for the duo’s new, yet to be released track ‘DUI.’ 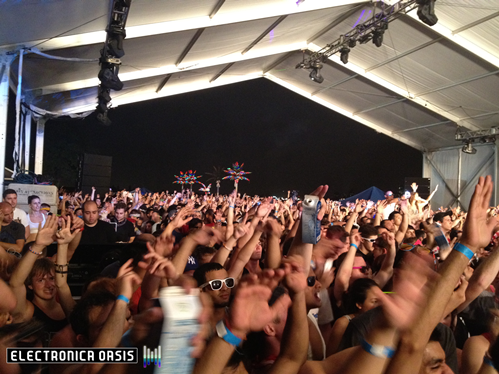 For any Gareth fan familiar with his podcasts (and if you’re not, you should be) you will know that he is quite fond of mashups. He went ham on quite a few on bootlegs, both his own and from others. Taking a page from Nari & Milani he used Morgan Page’s festival version mashup ‘The Longest Atom,’ which predictably was incredibly well received. Gareth then also proceeded to roll out Another podcast favorite Ferry Corsten – Live Forever vs. Dada Life – Kick out the Epic Motherfucker, two classics that work remarkably well together.

Suffice to say that there was not a dull moment, as the captivated crowd rose and fell with the crescendos. Likely even those watching from home could feel the energy emanating from the beachfront venue. Gareth closed his set down with ‘Tokyo’ followed by ‘Concrete Angel’ and then Myon & Shane 54’s mashup of the ‘This Is That’ with Delerium ‘Silence.’ It was a perfect final nod to his trance upbringing.