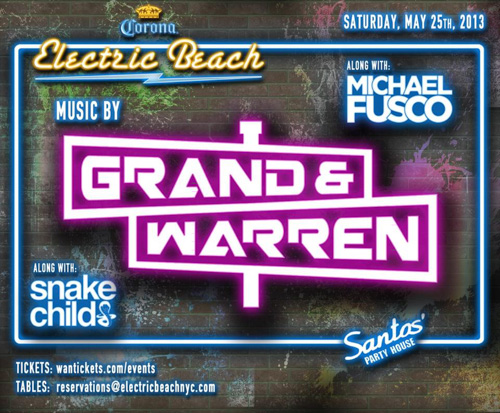 We already saw Grand & Warren keep the party going by closing out Pacha for John Dahlback on May 10, and last Saturday they continued to build momentum by headlining Saturday night’s Electric Beach party at Santos Party House. The DJ duo already have a growing fan base in their home state of New Jersey, where they play regularly at clubs like Bliss and 4Sixty6, and plenty of their fans showed up this Memorial Day weekend to celebrate.

DJ Gary Rabbit and James Alexander, who make up Grand & Warren, are newcomers to the scene but are determined to make their presence known. Some songs just need to be heard live, it doesn’t compare to the headphones listening experience, and their progressive house anthem ‘Waiting For Aiden’ is definitely one of those tunes – unforgettable once it’s heard in a club setting and demonstrates its power to destroy dance floors. Throughout the night, the duo dropped electro and progressive house hits that kept the crowd going crazy, including David Guetta and Nicky Romer’s ‘Metropolis’ and Sidney Samson’s ‘Get Low.’ They kept it interesting by playing unexpected tunes like a dance remix of Linkin Park’s ‘Numb’ that worked remarkably well.

The Socialytes, one of our artists to watch for 2014 have released a remix to Miley Cyrus’ ‘Adore You’. We actually love any Electronic…