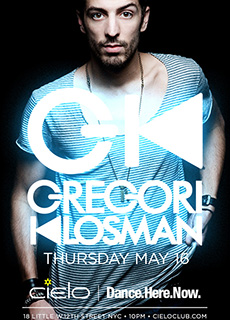 It was 4:30am on Friday, May 17, 2013 when we began writing this review. We were trying to rest for EDC NYC the next day, but couldn’t, because honestly, Cielo was THAT amazing Thursday night. We wanted to effectively put in words how incredible the set was, so we decided to waste no time and started writing as soon as we got home. Allowing these memories to fade even a tiny bit before recording them would have been unfair to the breathtaking Cielo Club, and the groundbreaking Gregori Klosman.

The night began with an opening set by Hyperbits, and as always, these New York natives did not disappoint. The versatile duo plays whatever they want really, getting everyone’s feet moving and their heads bobbing. It is quite noticeable how far these young New Yorkers have come, showing improvement with every gig they play. They ended with Keon Groenfeld, Slides into their remix of Krewella’s Alive, which even got Klosman’s attention. After their set they even stuck around to watch Klosman perform, which is impressive when you consider they had to be up bright and early to perform at EDC the next day.

At 1:00am Klosman took the decks, and the rest was history. Before he even dropped the first track he ripped his shirt off, grabbed the mic and exclaimed, “New York, I am only playing underground music tonight!” This brought the energy, and intensity of the club to another level. He displayed his producing ability by playing his own bangers Minibar, Bad Guy and his remix of Kaskade’s Room For Happiness. He also showed that he has an ear for what’s hot in the industry when he dropped Showtek’s “Get Loose”, Jewelz & Scott Sparks’ “NYMSN” and “Wakanda” by Dimitri Vegas & Like Mike.

To some, Klosman is considered a staple of the underground; He doesn’t have the most followers on Twitter, or ‘Likes’ on Facebook, but the loyalty of his cult-following is unmatched. Gregori Klosman is not “just another EDM DJ/producer trying to make his name”, though many people view him as such. Here in New York, where a large part of his following is based, he is viewed as an innovator, and he showed why Thursday night.