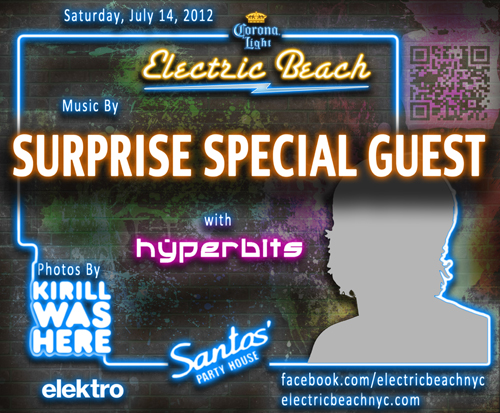 There was a sizable amount of buzz around this Electric Beach show due to the secret guest aspect of the night, and it certainly lived up to expectations. With a headlining set from EDX, who has come off a stream of hot releases in 2012, and tasteful opening and closing sets by EO favorite Hyperbits who just had their first original chart on Beatport, this particular night at Santos was one for the books.

The venue was packed at earlier than usual, with Robert and Serik falling into a groove early on. It sounded as though they were able to construct the ideal opening set, meticulously straddling the lines between big room bangers and groovy/driving tunes. Notable tracks included almost all of their own bootlegs (the biggest crowd-pleaser being ‘Move For Pong‘), their new original ‘Move‘ and their most recent edit of Deadmau5’s ‘The Veldt’, which is available for free download below.

Next up, the room seemed to have a good feeling as to who the secret guest was, but EDX still came out firing. He played proven club weapons like ‘Kaskade Vs. Tiesto, Hardwell, EDX & Marco V – Angel On My Shoulder Reaver 76 (Kaskade Mashup)‘, and his own ‘Sunset Miracles’ and ‘Everything’. The set went over so well that we can only hope Santos will again lend itself to another big name producer wishing to surprise the rapidly growing NYC dance music fan base.