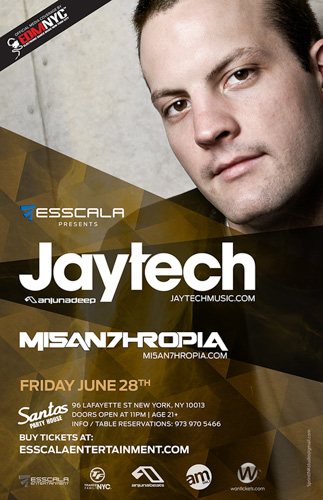 I arrived at Santos Party House on Friday night having no idea what to expect for my first Esscala party. What I found was a tight-knit group of music lovers dedicated to bringing fantastic underground trance artists to the forefront of the New York club scene.

Friday night’s show featured Anjunadeep (and now featured on Anjunabeats) artist Jaytech. The club quickly filled up once Jaytech took over the booth. With a huge smile on his face, Jaytech was receptive to the crowd and played a set that varied between trance and progressive house, featuring his hit single ‘Stranger’ off his album ‘Multiverse.’ He also gave a nod to fellow Anjunabeats DJ duo Norin & Rad, who recently released their track ‘Bird Is the Word.’ Though Friday night at Santos Party House isn’t as packed as their Saturday night Electric Beach party, Esscala brought out those truly interested in enjoying the music and having a good time. If you’re looking for a unique experience away from the overcrowded VIP club scene and the headlining DJs they bring, this is the place for you.

Check back soon for photos!

Tyler Sherritt has released a beautiful vocal track with Carl Nunes (not the first one), ‘Reflect’. This is the definition of a progressive house…