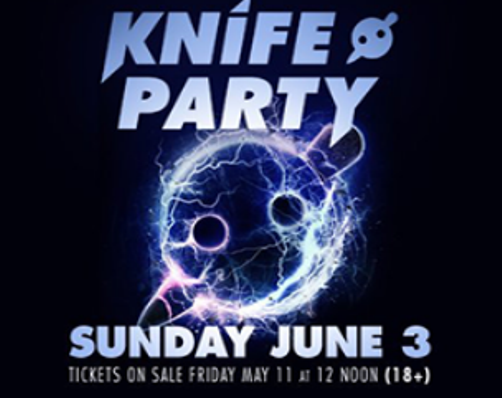 On Sunday, Knife Party headlined a phenomenally unique show at the Beekman Beer Gardens, along with openers Alex English, Sazon Booya, Nick Catchdubs, and closer Hellfire Machina. As we previewed a few days ago, we were quite enthusiastic about the show. Knife Party has really succeeded in making a name for themselves as some of the finest producers in dubstep, and what’s impressive is that their first show ever was only 10 months ago one August night in Ibiza.

The show was supposed to be at the Brooklyn Terminal Project, a brand new venue that promised many exciting concerts and raves. The venue had to be changed, as Brooklyn Terminal Project has moved all of their scheduled shows to other venues due to delays in the opening. But the show felt completely at home at the Beekman Beer Garden, a trendy, fun, and relaxed hotspot that isn’t usually associated with concerts, but seems to be hosting plenty this summer. Walking past the tent of music where music was being played, there is a neat little artificial beach with couches, a foosball table, and even an arm wrestling table,all surrounded by a gorgeous view of the East River and the Brooklyn Bridge.

Alex English opened up the show at around 5:30,and while we missed most of the set, English is a staple on the New York DJ scene, and always deliver a premium, groovy set. Sazon Booya came on after English, and Sazon delivered a quality and seemingly never ending set of moombahton. Sazon, who opened up for Skrillex earlier in the year, really nailed his set, and the ambiance during his set was probably the best of the day. Seemingly everyone was just smiling and kicking it during Sazon’s set, whether it was the ragers up front or the scenesters out back. It might as well have been a pool party. Sazon also played at EDC NY recently, and we are pretty certain we will be hearing more from them in the future!

Much more bloody bloody Knife Party after the jump!

Next up was Nick Catchdubs, a signee from A-Trak’s Fool’s Gold Records. Hit set was much more club and hip hop oriented. It’s funny that yesterday happened to be Hot 97’s SummerJam festival, because he played a lot of non-edited tracks that you will find on any given hour of 97.1. The setlist had Nigga’s in Paris and Rack City, amongst other staples of the genre. But hey, it was a really fun set that got everyone dancing, and he did throw in some of his own material too.

And finally, there was Knife Party. Taking the stage at around 9 PM, immediately the front of the stage got mobbed with a sea of ragers. While Knife Party did play most of their hits and some material from their new EP Rage Valley (avail for download on Beatport), it seemed primarily an electro house set. The front of the crowd was completely and utterly a sweaty, bro’d up mosh fest, with not enough dancing and too much shoving. This isn’t really surprising though, considering it was at a pretty narrow venue and Knife Party does describe their music as “seizure music.” When they dropped their edit of Skrillex’s Kyoto it probably damn near shook the Brooklyn Bridge. That being said, if you weren’t at the front, the vibes were plentiful and everyone was blown away by Knife Party. Their set was way too short, however. It was like 90 minutes. They don’t have that many tracks to their name right now, but I was fully expecting a 3 hour set of them producing technical wizardry, but it was short and at times they seemed a little timid. That might seem shocking considering their set was so damn loud, but Rob Swire is a masterful producer and DJ, and the set too often veered into the crowd pleasers. We can’t say this is a surprise considering it was such a short set, as we’re sure that had the set been an hour longer, Swire and Gareth McGrillen would’ve shown why they are some of the biggest bosses in EDM.

Alas, Knife Party still put on a thoroughly enjoyable set, and it was awesome to hear ‘Destroy Them With Lazers’ in a live setting.

Following Knife Party, Hellfire Machina took the stage around 10:30 and absolutely threw it down. Hellfire Machina is another staple in the NYC music scene and run their own nightlife team in NYC and the Bay Area called Bass Fueled Mischief. Unlike their usual opening spot, they closed out the show so they had no reason to hold back or fear upstaging anyone. The energy in the crowd was so electric, especially when HM dropped Dismantle’s ‘Computation’. Forty-five minutes into the set, we were surprised with a guest appearance by Max Mischief and the two played a b2b set until the end of the night. All in all, the set was incredibly dark and incredibly heavy, including tracks like Skream’s ‘Raw Dogz’, Eddie K’s ‘Serial Killer’, and Dee:See’s ‘Good Stuff’. Their set was a great crazy end to a great crazy night.

Overall, the day was a blast, with a lot of New York’s finest local DJ’s lending great support to Knife Party, a spectacular dubstep duo, even if their set was a little bit on the short side! Here’s to seeing them again in the Big Apple soon enough!

Afrojack and Diplo are set to perform at the 97th Indianapolis 500 on May 26th at the Indianapolis Motor Speedway. What are the chances…