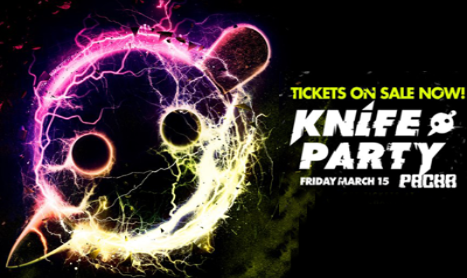 Let’s get this out of the way: Rob Swire and Gareth McGrillen are freaks. Not in a bad way, but rather in a Jevon Kearse type of way (Who’s nickname is the freak, for anyone who doesn’t follow sports). Not only were the two part of the enormously popular drum and bass group Pendulum, but they now have conquered the dubstep world with their newest project: Knife Party. This past Friday night, the duo invaded Pacha and it was spectacular.

In anticipation of Australian duo, Pacha’s dance floor was sold out far in advance. This wasn’t merely a moniker, the dance floor was literally jam-packed. So much so, that anyone attempting to go from the Mezzanine section to the dance floor, had to stand on the stairs. The lack of space didn’t matter to anyone. After all, Knife Party were playing.

The evening was started out with by local Tech House DJ, Gary Bitetto. Opening a sold out club for Knife Party is no easy feat. However, Bitetto performed admirably, he didn’t merely warm the crowd up, but he put on a show of his own. His set featured some great tracks including a Tech House remix of Marilyn Manson’s ‘Personal Jesus’.

At around 1:30 Bitetto’s set wound down and the duo that everyone came to see took over. The colored lights illuminating the club went dark and then suddenly flashed white, spelling out “Knife Party”, indicating the beginning of the duo’s set. It was a set nobody in attendance would soon forget. Knife Party started out relatively slow before breaking into their more popular tracks. However, when they finally did play those tracks, every single word was sung aloud by the crowd.

Knife Party showed significant range, not only did they play their own tracks such as ‘Sleaze’, ‘Internet Friends’ ‘Bonfire’ ‘Centipede’ and ‘Destroy Them with Lazers’, but they also used other artists immensely popular tracks. These tracks included ‘Breakin A Sweat’ by Skrillex, ‘How We Do’ by Hardwell and Showtek and ‘X-Rated’ by Excision.

Knife Party also played several trap beats. This seems to be a recent trend among big dubstep artists. Excision has been playing several trap beats on his Executioner tour. Additionally, Downlink recently announced via Facebook that he finished working on a trap song. Like these two heavy hitters, Knife Party’s trap songs flowed flawlessly and served as a great change of pace and BPM.

This wasn’t the only musical monkey wrench that Knife Party threw into their set. The end of their performance saw them return to their drum and bass roots. Interestingly, this “abnormality” did nothing to stem the absolute fervor that the sold out crowd had for the duo. Regardless of whether they knew the track or liked the genre, Knife Party kept everyone entertained. Of course, their own tracks were met with unanimous approval by the dance floor.

All in all, Knife Party put on a phenomenal show. Everyone in attendance was thoroughly satisfied and craving more. It’s a complete shame that their set only lasted for an hour and a half. If they had kept playing, absolutely nobody would have minded.

This begs the question: What’s next for the duo? Well, apparently they are due to release an EP at the end of this month (no official release information has been given). Moreover, what genre will the EP be? After all, Knife Party has already demonstrated that they spurn the notion of genres completely. They also have no reservations about garnering positive feedback. After all, everything they’ve done has been met with unanimous approval. Regardless, 2013 looks to be another big year for Knife Party.

What an unbelievable night at Pacha. This was my first time in the DJ booth, and it was a completely different experience. Not necessarily…