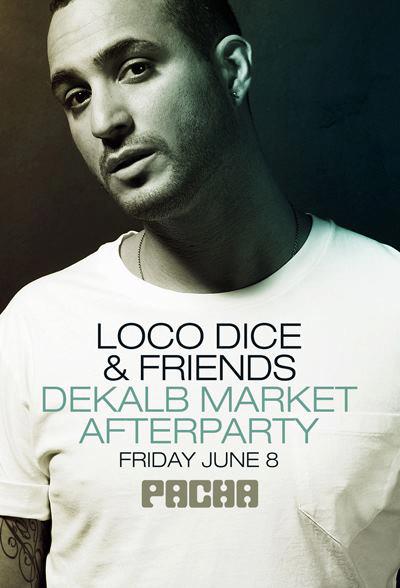 Loco Dice yet again proved to the New York crowd why he is the best in the underground business. His last New York appearance on December 2, 2012 (reviewed here) was nothing short of magical and he left the crowd in awe until 8 am. This time wasÂ different, as he played a bit harder, faster and louder due to the events that unfolded at Dekalb Market. Cops asking to lower the volume and a brief rain shower put a damper on the early evening, but Loco made up for it that night, ripping through massive tracks like Alli Borem’s ‘Once’… Read about Nic Fanciulli, Joris Voorn, and Loco Dice’s sets after the jump, and listen to a bunch of other track IDs from all 3 sets as well.

Joris Voorn, Nic Fanciulli and Loco Dice all played sets at Brooklyn’s Dekalb market prior to the Pacha afterparty. The vibe was awesome early on, although the space was limited. It was likely the smallest space that Dice has played since his 300 tour this summer. Nevertheless, New York’s Taimur and Fahad played a fantastic opening set, as they so often do for their legendary Blkmarket Membership parties (if you are unfamiliar, these guys bring in artists like Marco Carola, Nina Kraviz, etc).

Nic Fanciulli played a cool set as the sun was still out, dropping both new tracks from his most recent EP on Rejected (‘Movin On‘ and ‘Round & Round‘). He also played his brother Mark’s track ‘Sacrifice‘ which came out on Saved in February. For more on Nic, check out his new Balance Series Mix here. Joris also played really well, in anticipation of his headlining gig at Cielo later that night. He dropped DJ Le Roi feat. Roland Clark – I Get Deep (Joris Voorn This Is Not A Remix) Vs the familiar ‘What The Fuck’ acapella, along with this classic track ‘Goodbye Fly‘.

Loco only played for a little over an hour in Brooklyn, and halfway through he had to lower the volume. Luckily, he played an extended set at Pacha and completely destroyed the place. He seems to know the perfect time to throw in recognizable samples and acapellas, as he effortlessly mixed in Rick Ross’s ‘Everyday I’m Hustlin’ and Michael Jackson’s ‘Thriller’. What a professional! Below is a list of some of the big tracks he played. Who knows when the next time he will be back in NY is, so all who got to see him play at Pacha should consider themselves extremely fortunate. On a side note, he also has the best DJ dance out of anyone in the underground scene (see above).

Here it is! The long awaited release of this noisey duo by Armand Van Helden & Steve Aoki! We have included 3 versions here…