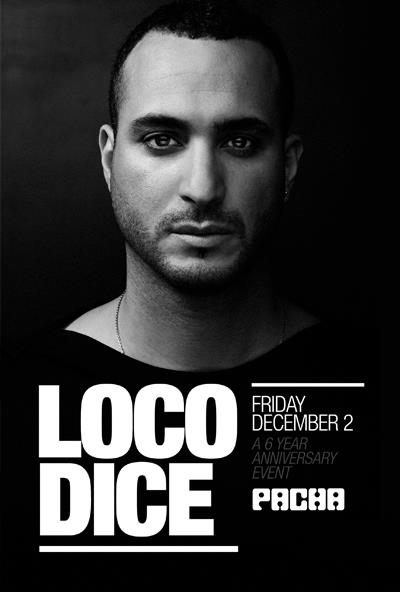 In a bold effort to expose our readers to the deeper and groovier side of the Electronic Dance Music spectrum, I will give you all a brief synopsis of Loco Dice‘s set from Pacha this past Friday, and attempt to explain why it was so damn good. I deem it acceptable to post this kind of tech-house oriented review because…well lets face it, this dance music scene is over saturated now with pop-friendly ballads ruling the airwaves, and DJ’s like Martin Solveig dropping Kelis “Milkshake” and Gwen Stefani’s “Hollaback Girl” in sets (yes, the original mixes). More or less, Loco Dice is the antithesis of this kind of DJ, as you can see from this video of him dropping ‘Adonis’ by Boys Noize at Electric Zoo this year:

First and foremost, Loco is no stranger to long sets and has even played a 16 hour marathon set on Space Terrace. This was no different and he played from about 1:30 AM to 8:15 AM. The set progression was flawless and cyclical, digging deep and suddenly throwing in a massive cut when you least expect it. The low ends were so heavy at times that the bass almost sounded distorted, but any true fan of this tech-house genre knows that the DJ always means for it it to sound like that. It is the nature of this music. I know that the Pacha 6th Anniversary parties are still going, but I am willing to say that Loco’s set will far exceed anything else. The vibe was unmatched and once he got in a groove, it was something truly remarkable. Being able to catch a DJ who usually plays European festivals for hundreds of thousands of people (Loveparade, Time Warp, Creamfields) in a club in NY was unreal, and luckily I was with a “pure” enough crowd that was able to ID some tracks. Click below to hear some of the noise that Dice was dropping.

At the end of the Summer, news surfaced that Insomniac Events pitched to bring EDC NY 2014 to Winston Farms where Woodstock ’94 (the…