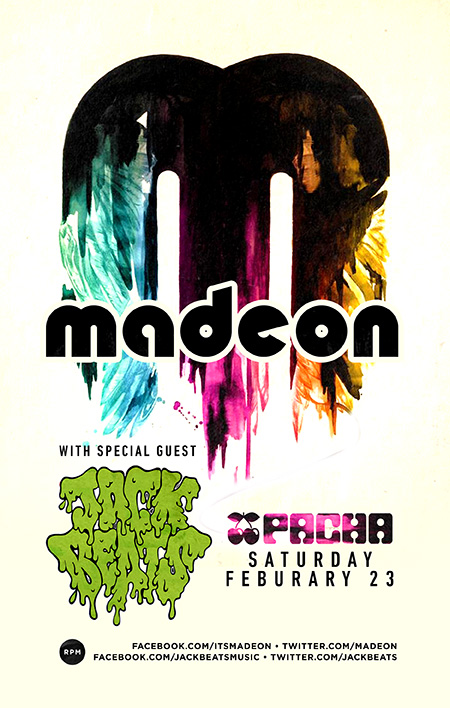 Fresh off his appearance at the New York Stock Exchange during the day, Madeon had a packed out Pacha to please at night. Madeon made history by becoming the first ever electronic talent to perform at the New York Stock Exchange. The 18-year-old dance music prodigy, who has just finished a North American tour supporting Lady Gaga, performed as part of the 5th annual Kairos Society’s Global Summit. The weekend’s big event serves as the The Kairos 50, going down on the floor of the NYSE, where the most cutting-edge companies worldwide started by undergraduate college entrepreneurs will be named. To play at the NYSE and Pacha in the same day is a pretty incredible feeling for the 18 year old. With opening acts of Tyler Sherritt and Jack Beats, you knew it was going to be a great night. Pacha had an energetic vibe from the beginning of the night, with many young and older ready to dance. There were a lot of foreigners in attendance, coming to see the boy wonder in New York City’s most famous dance club.


Tyler Sherritt set the tempo for the night at Pacha dropping a legendary Dirty Dutch remix to Trinidad James’ ‘All Gold Everything’ chorus. Tyler is a New York City DJ who is on the rise as well, taking over the club scene and opening for huge acts throughout the city, so look out people. After a wildly entertaining set by Jack Beats, Madeon came on at around 1:45. It never feels that late in Pacha because you somehow lose track of everything when your having such a good time. Madeon got a huge ovation from the crowd, with many younger girls in attendance to see the Frenchman in person. Madeon looks like he can’t pass for a day over 15, but he sure knows how to make a crowd have a great time. With his live mixing skills and pure excitement to be at Pacha, his set was perfect. Dropping his own tracks such as ‘Icarus’ and ‘The City’, to dropping Blur’s ‘Song 2’ rock anthem, Madeon played the crowd and had Pacha alive. When he dropped ‘The City’, the whole crowd sang alone, with female voices echoing throughout the venue. He also dropped his remix to Deadmaus’ ‘Raise Your Weapon’, a big part of his claim to fame. The hottest song to be in sets across the world right now is ‘Easy’ by Mat Zo and Porter Robinson, and Madeon hit it off in the middle of the set to the crowds delight.

Madeon had such a dynamic set which really impressed us. Going in, I wasn’t too familar with his music except for his bigger songs and was interested in seeing him at Pacha. Pacha is the mecca of dance culture of New York and is always bringing in A-list acts. Madeon had such great interaction with the crowd, feeding off their energy unlike many DJs I have seen before. Whether he was dropping ‘Heads Will Roll’ or his remix to Martin Solveig’s ‘The Night Out’, Madeon had Pacha in a frenzy from beginning to end. The 18 year old has a huge future ahead of him, and if you were there on Saturday night, you can agree.

We will be at Pacha once again on March 15th checking out Knife Party. That will be a night to remember, for tickets click here. Check the video of Madeon performing at the New York Stock Exchange below.

Electric Zoo Festival 2013: What You Need to Know – Friday: Riverside

Riverside, the stage for the lovers of the heavy music is going to be fun all weekend. However, on Friday this stage will be…