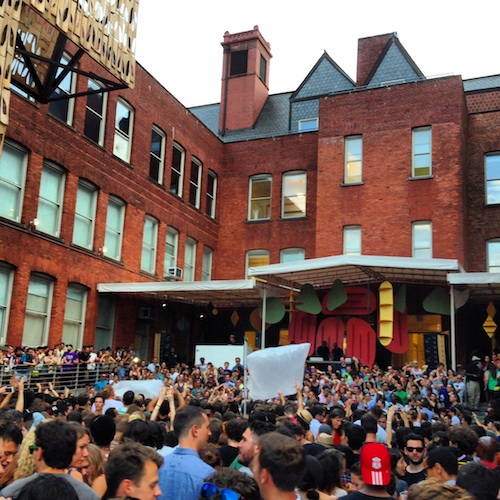 Every Saturday, from June 29th all the way to September 7th, MoMA PS1 host their annual Warm Up series. Located in Long Island City, Queens this venue is home to one of the most unique musical experiences around. Not only do partygoers get a full day of tunes outside in a courtyard, the venue also doubles as an art exhibit! Plus, to top it all off, it’s free for Long Island City residents!

It is truly a one-of-a-kind event. Musical acts come from all over the world to showcase new and established material for a range of viewers. Audience members ranged from older guys in Hawaiian shirts, to your standard manhattanites, to the classic Brooklyn hipsters and even little kids on their parents shoulders. PS1 also makes it a point to insert local art throughout the grounds and displayed on the stage. There is really something for everyone.

When you first get through the doors at PS1, a ginormous wooden structure takes up a good portion of the outdoor space. Within the structure are two small little pools of water that people are eager to get their feet into and also giant punching bag like objects hanging high above your head. If that wasn’t sweet enough, from time to time this wooden sculpture releases a mist of water to cool people off from all the dancing taking place in the sun. The winner of the Young Architects Program, which is in its 14th year, this larger than life thingamabob by CODA is named the “Party Wall”. The courtyard grounds are also equipped with what look to be skateboard decks converted to benches and many are attached to the ground for those who are height challenged in a sea of people. The venue has a good selection of food and beers on draft. Not to mention their water comes in containers resembling milk cartons. 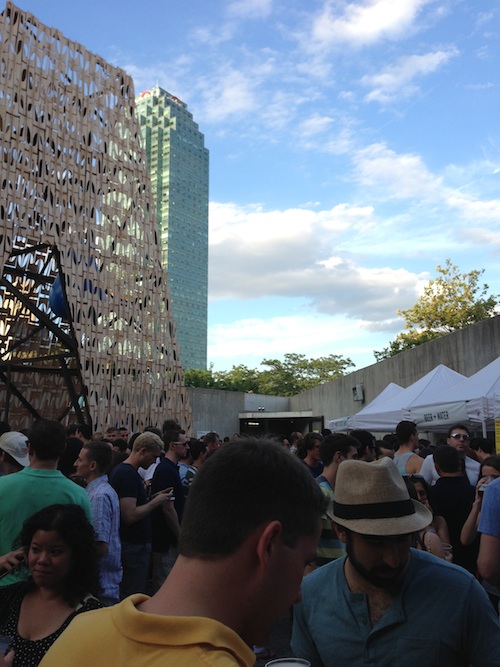 The day began with with DJ Dodger Stadium (Los Angeles) getting the music going, followed by Hyetal (UK) and than a live performance by Octave One (Detriot). Only until the man of the hour, or rather hours, came up on stage. All the way from Bristol, it was Julio Bashmore’s turn. Talk about a funky good time, there was definitely some serious disco fever going on in the audience. A fan favorite was when Bashmore dropped his classic “Battle For Middle You”. People really got grooving towards the end of his set when he played an awesome rendition of “Erotic City” by Prince.

MoMA PS1 truly has something special going on in Long Island City. Its conveniently located for people in surrounding areas to get to, right over the Pulaski Bridge and next to the 7 train. There is enough diversity, both in the music and art scene, that it is truly hard for someone to not have a good time there. There are only a few weeks left of Warm Up 2013 so make sure you check out the lineups and get your tickets ASAP!

A little surprise from the Swedish prodigy Alesso, brand new track off Size Records called, ‘Raise Your Head.’ Expect nothing short of spectacular…