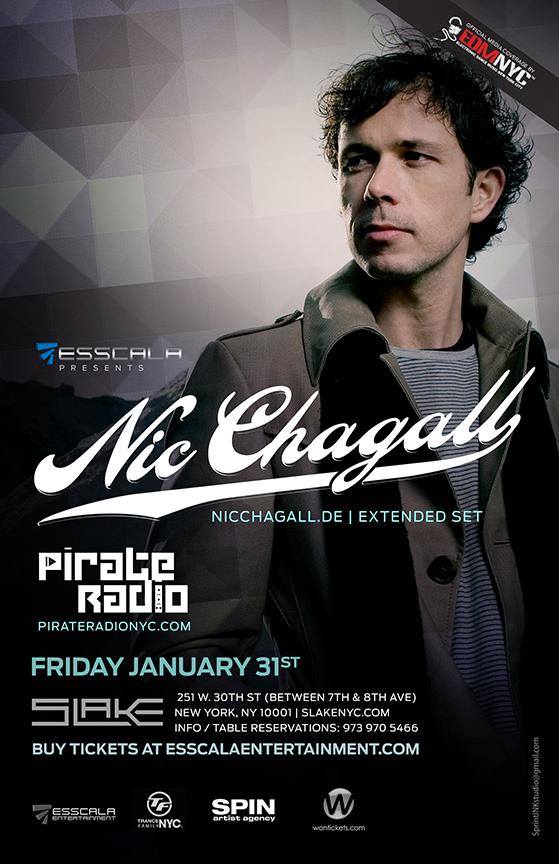 This past Friday, Nic Chagall took the decks at Slake and spun a nostalgic extended set in the utmost Esscala-esque fashion. Nic Chagall (aka Claus Terhoeven) may be the mastermind behind (and one half of) world famous trance duo Cosmic Gate, but his efforts do not end there. Nic Chagall’s eclectic productions speak volumes about his expansive knowledge of music, with a diverse range of influences spanning from electronica to classical to rock. After a long hiatus from touring as a solo act, Nic Chagall has recently been touring the globe. Despite Nic’s deeply rooted involvement with Cosmic Gate, the set he performed at Slake last Friday was not a “Cosmic Gate set,” but rather a nostalgic journey through the past decade of dance music, focusing primarily on trance with some deep house sprinkled throughout; moreover, while Esscala events are usually jam packed with familiar faces and the company’s friends and fans, Friday night’s show attracted a different crowd than usual.

Brooklyn-based One-part DJ, one-part guitar dance music project Pirate Radio warmed up the decks for Chagall with their unique soothing sounds. There was a smooth transition from opener to main act; Nic Chagall set up his decks during the final moments of Pirate Radio’s performance. Opening his set with a bass heavy track, Chagall eased the crowd into the night. Normally, Esscala events are flooded with the faces of those who have stood by Esscala since they first starting hosting events back in the Spring of 2012; however, this past Friday’s show attracted a new hoard of faces. After spotting a few friends in the crowd, it was made known that many of the “regulars” ventured to Atlantic City to catch Above & Beyond that evening. With a surplus of DJs constantly circulating the tri-state area, event dilution is bound to happen. Nevertheless, Slake was still comfortably full with enough space to easily move from room to room and get a drink, as well as enough of a crowd to support the artists.

After a brief warm-up track, Nic Chagall dove right into his set with his remix of Mark Eteson & Aruna’s track ‘Let Go’ and then transitioned into a deep remix of Jamie Woon’s ‘Shoulda’. Chagall followed with Eric Prydz’s ‘2Night‘, which had everyone grooving to its delicate sounds and driving chords. Chagall continued on to play a varied mix of trance, progressive and deep house gems that had attendees dancing into the wee hours of the morning. One notable (and happy) surprise was Chagall’s integration of tracks found off of classic Tiesto albums such as the In Search of Sunrise series. In 2008, Chagall performed at Mysteryland and joined Tiesto on his In Search of Sunrise stage- seems only fitting that Chagall would showcase some of those older tracks the old DJ Tiesto (who we all miss dearly) included on his compilations.

Although Friday night’s Esscala event was unlike the others in regards to who was in attendance, Nic Chagall spun a well rounded set in line with Esscala’s tenets to break away from the mainstream. It is also always encouraging to see new faces willing to expand their current music palate at some of the more “off the grid” shows. As always, thank you Esscala for always remaining true to your mission!