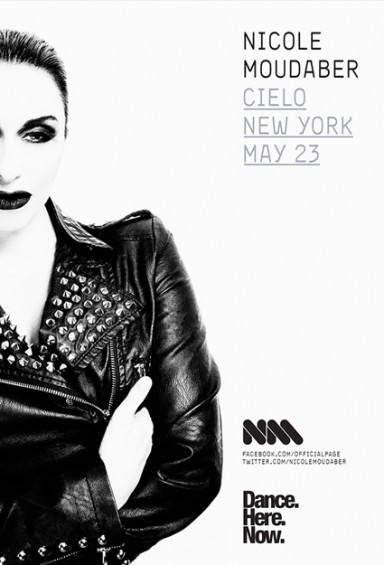 Cielo was just getting started as we arrived just after 11PM, but already the buzz was growing about Nicole Moudaber. The rising techno producer was celebrating the release of her debut album ‘Believe’ and her growing popularity in the underground scene by performing a hot and heavy set through some of the best speakers on the East Coast, presented by Dance.Here.Now. With song titles like ‘She Wears the Pants’ and ‘Don’t Touch My Junk,’ we knew she’d be bringing some badass attitude with her.

The opening DJs warmed up the intimate space with some good house beats, but as the night progressed, we could hear people all around us excitedly asking when Nicole was going on. With the DJ booth nearly on top of the dance floor, heads turned constantly waiting for Nicole’s signature big hair to appear in the booth. When it was finally announced that Nicole was in the building, the crowd cheered, more than ready for her to take the decks. Finally, around 12:45AM, the queen of techno herself showed up and made her presence known by immediately throwing down harder, heavier bass. Each time she took the crowd higher with a new drop, exclamations of “Whoa” and “Wow” could be heard throughout the club.

Nicole looked and felt right at home at Cielo and had nearly everyone in the club really dancing by the end of the night. She dropped plenty of favorites from her new album and her tracks on Drumcode, but as soon as the opening vocals of ‘Come and Lay’ broke through the speakers, the crowd went wild in anticipation. By 4AM, the dancing was still going strong and Nicole showed no signs of stopping, keeping her tech house beats rolling and the crowd increasingly impressed. She brought out a good group of people there for the music and only the music. Nicole will be touring in Ibiza this summer, but you can be sure she’ll be back in New York soon.