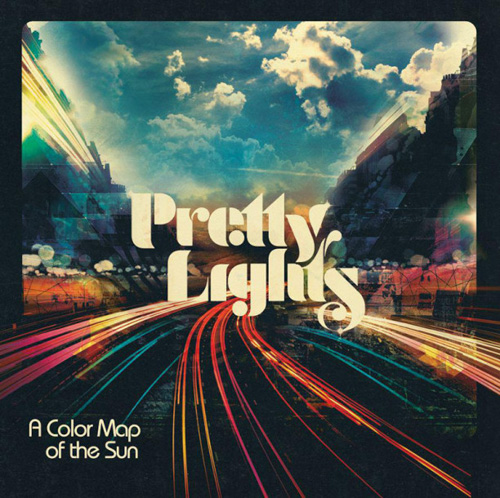 Output is the current gem of the underground electronic scene, a restored anonymous warehouse in Brooklyn that only distinguished itself by the massive line of people waiting in the rain for the handful of tickets on sale at the door for Pretty Lights‘ album release party. Rumors stated that some fans had been waiting since as early at 2PM. The rain thankfully was nothing more than drizzle, but it was enough to prevent the pre-party from taking place on the rooftop lounge. Instead, the guest list crowd gathered in The Panther Room for drinks and conversation before the show kicked off at ten.

The Panther Room has a retro vibe, ambient lighting and leafy plants that add an exotic touch. A large, well-lit canvas leaning against a wall displayed a work of art in progress. The artist used spray paint and paintbrushes to design an abstract piece while we watched it come to life. The rooftop was open, though fairly empty given the rain, and offered a spectacular view of the Manhattan skyline. Not long after the room opened up, Derek Vincent Smith (aka Pretty Lights) made an appearance, chatting with fans and posing for photos. He was easy to spot, towering over the crowd and wearing a Brooklyn Nets hat.

Around 9:30, the music stopped and the staff started directing people into the main club area. The space was small and dark, black lights lined the handrails and stairs. The light set-up around the stage was unique. A cage structure lit from within glowed beneath the DJ booth. Behind the DJ, lights reminiscent of factory warning lights rotated through pastel rainbow shades, adding to the industrial feel of the place. There was ample seating with comfortable padding and a balcony that gave an excellent view of the crowd below. From one spot, it was easy to watch the DJ at work.

Eliot Lipp opened, warming up the crowd with a chill dub set that prepared us for the heavier beats that Pretty Lights would bring later. The club slowly filled up as the long line waiting outside was let in. Sometime after midnight, Pretty Lights took the stage and took full advantage of the amazing light and sound system that Output offers. The floor was packed, everyone dancing to tracks from his new album, as well as old favorites. He even threw in some old school hip hop that meshed well with the groovy, bouncing dub sounds that he played. Later in his set, he played two Radiohead remixes back-to-back. His remix of ‘Everything In Its Right Place’ with Kurt Cobain’s vocals from ‘All Apologies’ is absolutely unreal live. The mood in the entire room shifted, affected by the mellow, trippy track that completely reworked some well-known songs into something entirely different and unique. This was followed by a remix of ‘Karma Police’ that took the crowd further into the chill vibes that Pretty Lights created.

The night was a special one, celebrating the release of ‘A Color Map of the Sun’ and bringing together a legion of Pretty Lights fans at a venue that truly respects the music scene and the artists behind it.

You can read our review of ‘A Color Map of the Sun’ here and check out the many ways to experience the album.

a color map of the sunbrooklynOutputPretty Lights

The traveling Bounce Music Festival is making its debut appearance in New York on October 31, 2013 and tickets go on sale tomorrow. Though…