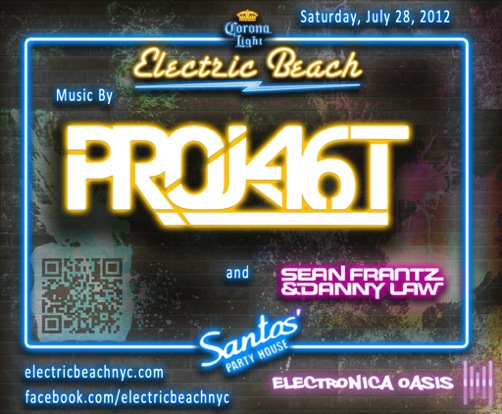 Canadian duo Project 46 made their way south (way south – below Canal Street!) to make their NYC debut headlining at sound system haven Santos Party House, for Saturday’s weekly Electric Beach party. It was a house music heavy evening in NYC (Madeon and Eric Prydz were showing their wares as well) but Project 46 played to a steadily packed house at the downtown club.

The Electric Beach party, which hosted its inaugural party only last fall, has since emerged as one of the premier venues to see up and coming DJs in the city. The party is consistently pulling names you love but haven’t yet been corrupted by shows frequented by the neon clad hoards. Project 46 certainly falls into this category, having reached #1 on the overall Beatport chart with their track ‘Reasons‘ in April.

Their set was chock full of their original tracks and remixes, including many that are yet to be released. With so many DJs pandering to the crowds, one can often become fatigued going to shows and hearing the same tracks, almost on repeat. Project 46 made sure to keep the crowd jumping with cutting edge music. Their track ‘You & I’ with Dubvision featuring vocals from Donna Lewis won’t see the light of Beatport’s day until September.

You may also remember their ‘unoriginal’ track ‘Iceberg’ that the duo set out to finish as a favor for a friend, but which ended up with a #9 spot on Hype Machine. Not too shabby, eh? On Saturday they put Justice’s ‘We Are Your Friends’ acapella over the track and the crowd went off. Listen below and get bopping (you won’t be able to stop.)

Also, have you heard their Ã¼ber-catchy remix to the Night At The Roxbury theme song â€˜What Is Love?’ It’s been charting for actually months on the Beatport pop/rock list with no end in site. Another track heard Saturday is their upcoming Armada release ‘Feel The Fire,’ proving their diversity in production.

Through all the sweat, bumping and grinding the night ended strong with the duo’s remix to Dirty South & Thomas Gold’s sophmore collaboration with Kate Elsworth ‘Eyes Wide Open’ and finally closed out with ‘Breath,’ a track so new it has no release date. The crowds then spilled out into the dark Chinatown early morning, vibing from the original sounds and fresh beats from their neighbors to the north.

Arty will not make it to Pacha NYC tonight due to passport issues. His management has said they are trying to reschedule a date…