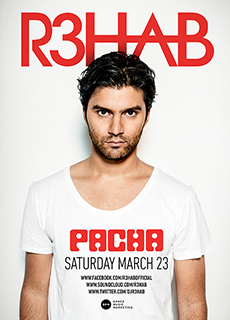 A day after he rocked Ultra Music Festival, (his set can be found here) the Dutch DJ was primed to take over NYC in a relatively quiet weekend for the city. In the hours leading up to his set, the anticipation for R3hab’s set was rife in the air. As the night wore on, the anticipation only mounted to a point where it was actually palpable and the crowd appeared tense. This was only natural, after all, R3hab is considered one of the top DJ’s on the planet. He soon showed everyone in attendance exactly why.

As he took the stage, R3hab hoarsely apologized for him losing his voice before saying that he was excited to be playing in New York City. He then announced that although he shouldn’t be saying it, he’d be playing at this years EDC. This definitely made some people somewhere very upset, but delighted everyone in attendance. This wasn’t the last of R3hab’s antics throughout the night, he also ‘broke out the bubbly’ spraying champagne onto the crowd before passing the bottle into the crowd. R3hab is a true entertainer in every sense of the word. More after the jump.

Musically, R3hab easily flitted between various genres. Going between Electro and Progressive house on a whim. He also showed no aversion to playing relatively unknown remixes of popular songs such as Afrojack & Shermanology‘s ‘Can’t Stop Me (Kryder & Tom Staar Vocal Mix)’ and Zedd‘s ‘Autonomy (Cold Blank Remix)’ and ‘Spectrum‘. The former’s presence is particularly interesting when one realizes that R3hab had his own remix of the track.

Additionally, R3hab played quite a bit of his remixes. This is understandable seeing as R3hab is one of the most highly sought after DJ for his remixing talents. His selection ran the gamut Tiësto‘s ‘Chasing Summers‘ to Calvin Harris‘ ‘Bounce’ and ‘We’ll Be Coming Back’. The bulk of R3hab’s set was made up of his remixes which showcases just what a talented remixer he is.

R3hab played a few of his own original tracks such as his collaboration with Shermanology ‘Living For The City‘ and his collaboration with ZROQ ‘Skydrop’. Both of these tracks set dance floors ablaze when they premiered last year, and Saturday night was no exception. The Dutch DJ also premiered a brand new collaborative remix with Diplo to the excitement of the crowd. However, the remix ended up being Trap House which did not totally immerse the crowd as his Progressive and Electro House tracks had.

This signals an alarming trend in EDM that many have seen coming for a while. Trap House is slowly showing its influence on even the biggest name DJ’s and many wonder whether this is merely a fad. In fact, we previously discussed this issue nearly 8 months ago. You can read that article here. In addition, R3hab was also not above playing the ever popular ‘Harlem Shake’ (Yes, that Harlem Shake).

However, these are minor quibbles when viewing R3hab’s overall set. The veteran DJ acted like a puppeteer. At certain points in his set he’d allow the crowd to settle down and even teeter the line of boredom before jerking them back up at a whim. This is not a point of criticism but a testament to R3hab’s prowess as a DJ and a performer.

So, in further proof that beats are the new frontier, it was just announced the Cosmopolitan of Las Vegas will host the Sports Illustrated…