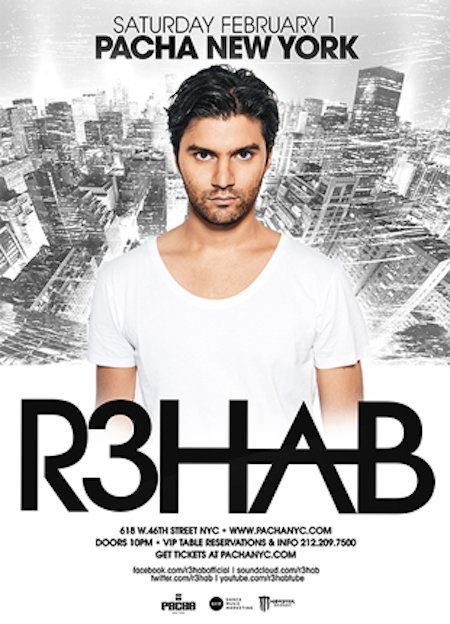 What EDM has accomplished in New York in the past few years really is something else. On Saturday night, R3hab, arguably one of the world’s biggest DJ’s took to the decks at Pacha NYC. It was Superbowl weekend in New York, the first time ever the state was holding the event, so things were already bananas. There were also private parties upstairs in the Mezzanine being held by NFL’s Brian Cushing and Pacha’s owner Eddie Dean. Pacha had an energy like few had seen before.

The line was around the block, and even the street was blocked off. As soon as you saw the giant Pacha logo on the building, you got some sort of goose bumps, like ‘This is New York’. There were fans from NY,throughout the U.S and the world all in town to see R3hab at Pacha.

After Tom Staar warmed up raceous Pacha crowd, Chants of R3hab echoed the main floor, and you knew things were about to get reckless. The Dutch star hit the decks and the crowd went mayhem. He opened up with Hardwell and MAKJ’s ‘Countdown’ leading into his remix Ellie Goulding’s ‘I Need Your Love’ which had the crowd singing from there on out, with countless CO2 sprays and horns. Everyone had their phones out ready to capture the moments of the Dutch producers set and share it with friends. R3hab played his big tracks like ‘Rip It Up’ , ‘Flight’, ‘Revolution’, and many more. He mash-ed up a lot of tracks and really didn’t do typical mainstream stuff. The Dutch phenom kept the Pacha club going late into the night, playing until almost 4 A.M. R3hab had a tough act to match his performance at Pacha in March, but we think he went above and beyond, continuing his reputation as one of the premiere DJ’s in the world.

Sikduo closed out the night and really kept it going until 6 A.M, where Pacha had no signs of stopping. It’s really cool to see a full dance floor early hours in the morning , with the same energy the night had when it started.

As the end of Ultra Music Festival 14 draws nearer, UMF has already started to hype up next year’s edition through the UMFTV live…