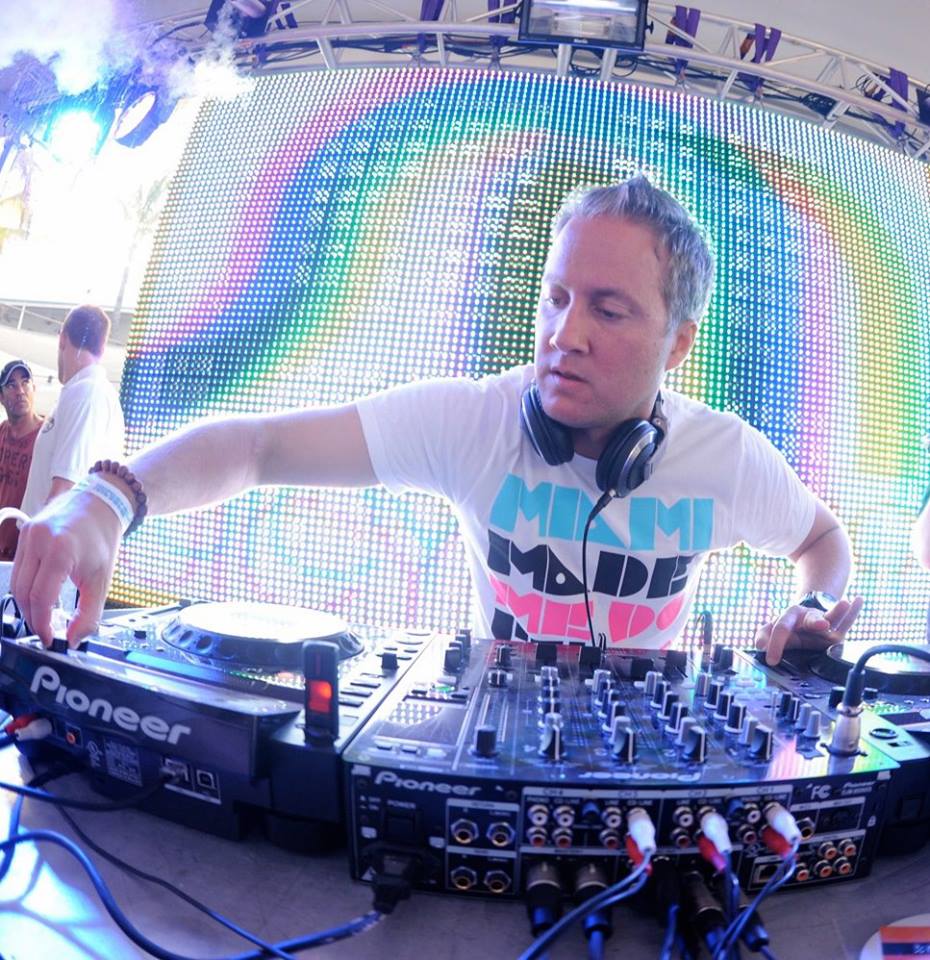 Back for it’s second year in a row, Robbie and Monica Rivera’s Juicy Beach took Governor’s Island with force, delivering a night thumping with electro and tribal house beats from opening to closing set. Just a few days prior, Robbie tweeted that he would be playing a slew of Juicy Beach label classics and asked that attendees sport Pink, White or Blue– the label’s signature colors. While most did not obey the dress code, it was no indication of lack of enthusiasm for the event. Waiting in line for the ferry, eager attendees dropped to the ground to do pushups (to each their own haha), while others discussed past Juicy Beach experiences, whether they were from last year’s Governor’s show or the annual occurrence down at Miami’s Nikki Beach Club during Winter Music Conference.

This year, Robbie was supported by promising up-and-coming talent, including New York natives, Jus Jack, Mysto & Pizzi and Paige. Jus Jack and Mysto & Pizzi warmed up the early arrivers for the first two and a half hours of the evening. As attendees started to fill in, they were able to enjoy the solid progressive house sounds of both sets. Due to the nature of Ferry transportation, the crowd began to fill the Island in small waves, but by the time Paris & Simo took the decks, the main tent was filled. 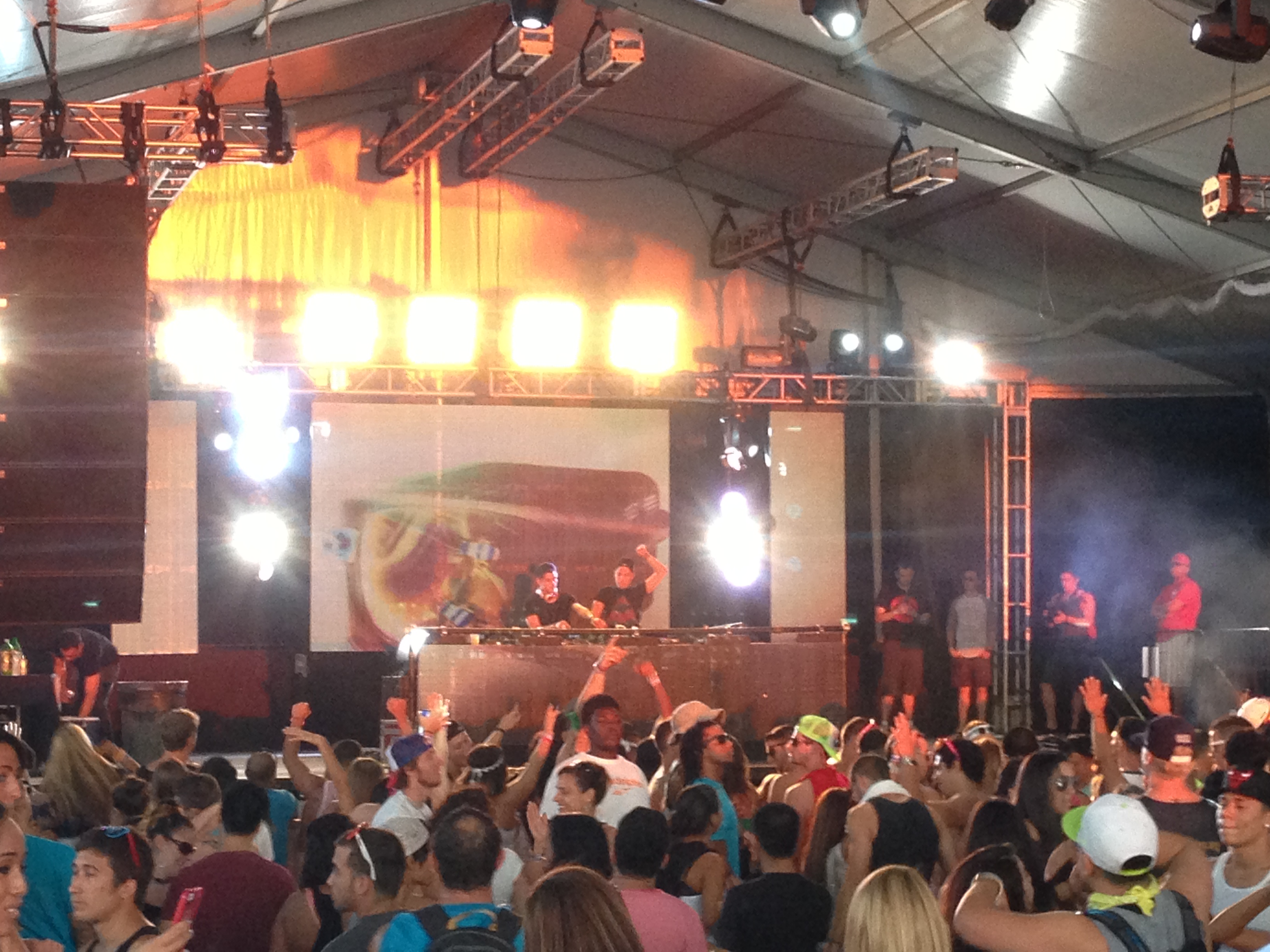 Paris & Simo rushed to take the decks at 7pm, arriving at the nick of time only a few moments before they were scheduled to DJ. They played a very progressive and electro house set, incorporating popular songs intermittently in such that it was enjoyable and seemed fresh. They dropped the drum-heavy ‘Liceus’ by Sebjak & Marcus Schossow and transitioned into Dannic’s ‘Ignite,’ which kept the island bouncing.

By 715pm, the main tent area was comfortably full, with plenty of space for fancy footwork and outrageous moves with few people populating the sanded area. Paris & Simo looked adorable on stage, feeding off each other’s energy and playing up their duality by intertwining and crossing arms to work the mixer to their liking. The Deniz Koyu Remix of Zedd’s ‘Spectrum’ flowed effortlessly into a mash-up of Green Velvet’s ‘Flash’ and Deniz Koyu’s ‘Bong’ that echoed the infamous “camera’s ready prepare to flash.” The DJ duo kept the crowd on their toes, dropping Tujamo & Plastik Funk’s ‘Who,’ another drum and bass heavy track; they transitioned into Armin’s remix of ‘Downpipe’ and a remix of Calvin’s ‘We’ll Be Coming Back’ to lighten up the set for a brief period. Paris & Simo dropped their own ‘Tundra,’ which showcased the duo’s ability to produce heavy, but still melodic, tracks. During the second half of their set, Paris & Simo also tapped into their personal vault to drop ‘Nova’ and ‘Escape,’ their collaboration with 3LAU. For the final leg, the duo dropped a mass of drum-heavy tracks, including ‘One Look’ by David Tort and Gosha and ‘Triton’ by Sunnery James & Ryan Marciano and Dubvision.

Leaving the crowd hopping from left to right, Paris & Simo slinked off the decks around 8pm, making way for Sick Individuals. The Dutch duo fed off the already amped up crowd, starting off with Ummet Ozcan and DJ Ghost’s ‘Airport’ and their own remix of Rihanna’s ‘Right Now.’ The crowd was loving the influx of energy and dance circles formed throughout the mass as people jumped in to show off their moves. Sick Inidividuals dropped familiar favorites, such as ‘Out of My Mind’ by Bingo Players and a heavy remix of Icona Pop’s ‘I Love It.’ Their set was very build-up/drop heavy, as is the nature of the electro house genre; nevertheless, the crowd ate it up as they dropped tracks such as their remix of ‘I Choose You,’ ‘Rest of My Life’ by Usher, David Guetta & Ludacris and a remix of the Chili Peppers’ ‘Other Side’ that had the crowd clapping along. You could barely make out the Torro Torro remix of Zedd’s ‘Clarity’ as the crowd belted out every word. Sick Individuals rounded out their set as jacked as they began, dropping the Tiesto Remix of Showtek & Noisecontrollers’ rowdy track, ‘Get Loose‘ and Deorro’s ‘Yee.’ 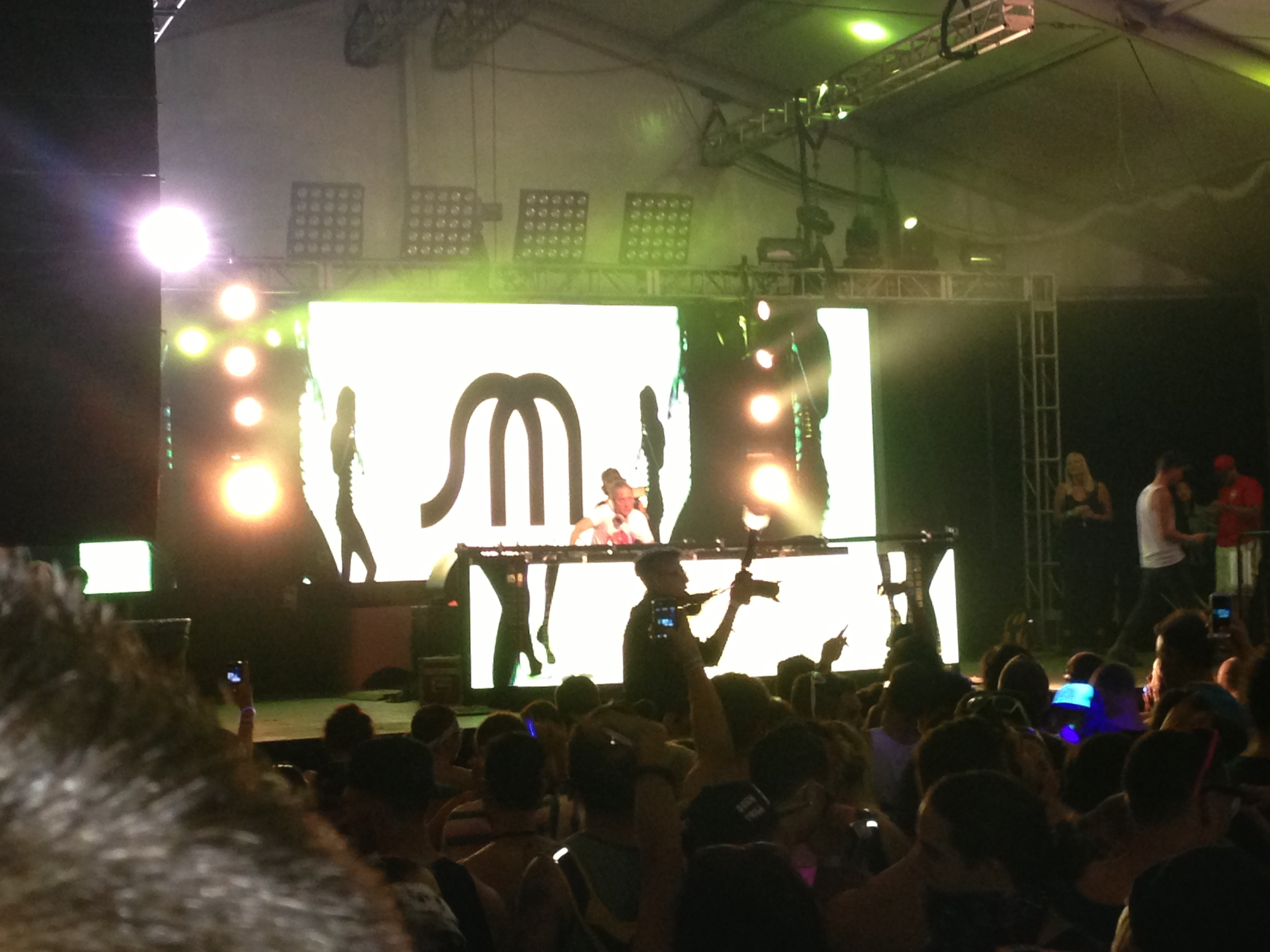 By the time 9pm rolled around, the crowd was yearning for the juicy beats Robbie promised, and juicy they were. Right off the bat, the signature succulent sound Robbie is known for poured out of the speakers. He commenced with the Lucky Date Remix of his ‘Forever Young’ as the crowd threw their necks back in true Charlie Brown style to sing along to the chorus. Robbie immediately transitioned into his latest single, ‘Move Your Ass,’ which had the island doing exactly that as everyone tried to keep up to the drum-heavy beats underlying the track. Slowly but surely, the familiar sounds of ‘Infinity‘ crept up and, with a yell, the crowd embraced the Juicy Remix of the catchy favorite.

The tantalizing drums of “Move Move” bellowed as the fixating lyrics commanded, “When the music starts to build and you start to lose control, look up at the Dj, the master of your soul.” Robbie flawlessly transitioned from this classic to the even older ‘Feel This’- his trademark tribal bass never letting up. After an afternoon and early evening jam packed with electro hits, Robbie was a breath of fresh air. The smiles, shouts and moves of the crowd affirmed that everyone agreed. 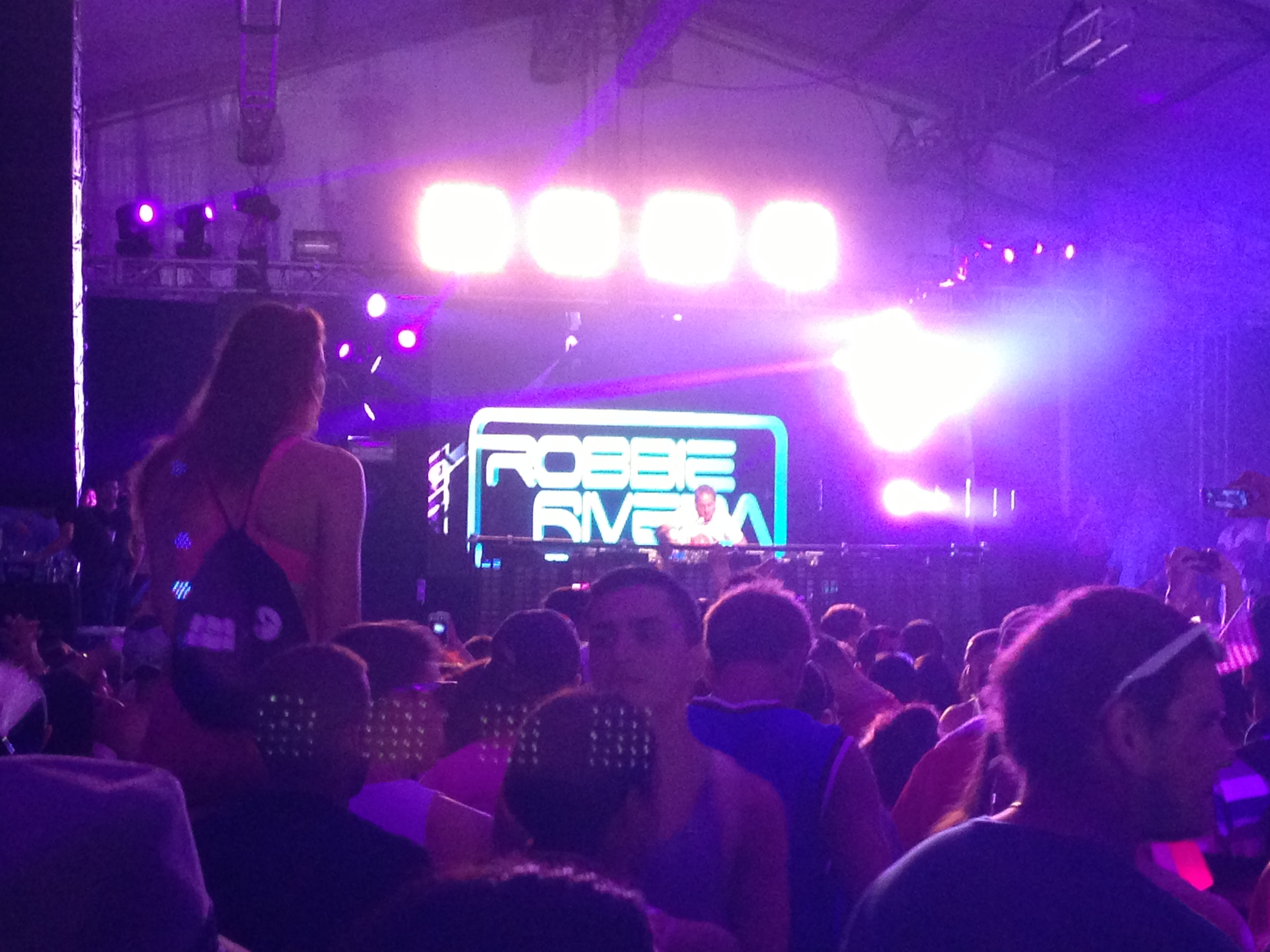 Robbie dropped the Juicy Drum Beats version of ‘Batucada’ just before his famous track ‘Girlfriend,’ whose euphoric sounds and driving melody froze the crowd in place so all could enjoy the beautiful track. He continued the vocal interlude by incorporating the drum-heavy Marco V Treatment of ‘Mr. Brightside.’ Sander Van Doorn’s ‘Neon‘ followed, another melodic up-beat track whose whistling sounds fit in nicely amongst Robbie’s tribal sounds. He took a brief pause from the tribal drum and bass to integrate his famous ‘Back to Zero’ and the W&W Remix of ‘This is What it Feels Like,’ but immediately transitioned back into the wild drums the crowd came to hear.

As 11pm approached, Robbie winded down his set with tracks such as ‘Crushed’ by Cosmic Gate and ‘Bend and Break’ by Keane. In his final minutes, Robbie artistically incorporated his track ‘Departues,’ which echoed euphoric cries of goodbye. For his final song, Robbie Rivera unexpectedly played Deadmau5’s ‘Strobe’ for a masterful ending. His set concluded all too soon and he could have easily played for another hour until close. 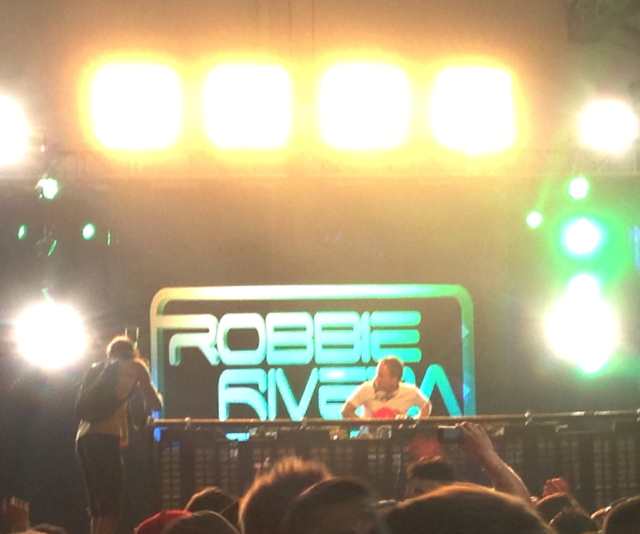 Paige supervened Robbie Rivera and opened with the third remix of Green Velvet’s ‘Flash’ for the evening; however, the crowd either did not notice or just didn’t care and continued to dance, still soaring from the prior two hours. As attendees slowly filtered off the island, Paige concluded the evening with a high intensity electro set that included the Special Features remix of ‘In My Mind’ and the Tiesto & Blasterjaxx remix of ‘United.’

For it’s second consecutive year, Juicy Beach took Governor’s Beach Club by storm and Robbie Rivera delivered a unique set that was refreshing compared to the ever present electro house and top 40 sets often exhibited on the Island. We hope to see Juicy Beach return next Summer for another drum-filled night of lush music.

My man Dirty South is back in the remix game. My first awesome DJ set was Dirty South and Mark Knight a few years…