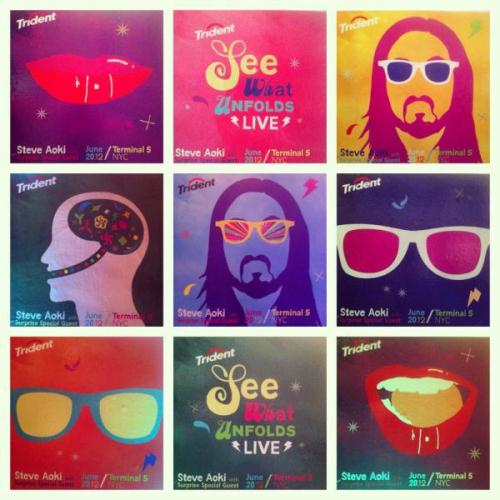 Last night Steve Aoki brought his signature antics and showmanship to NYCâ€™s Terminal 5, for a Trident sponsored free show that had boasted of a special, surprise guest. In what became a poorly kept secret throughout the day, various tips and Tweets confirmed that legendary British pop rock band Duran Duran would be joining Aoki on stage. Thanks to the rise of house music, the melding of genres looks to be the next step in pushing live performances and produced tracks to the next level.

However, in the rush to usher house music into the mainstream, a step was skipped in the attempt to meld a show with Aoki, an early pioneer in the Los Angeles house music scene, and Duran Duran, a group that experienced its heyday prior to the births of most of last nightâ€™s concertgoers. The various floors of the multi-level venue were more segregated than an Orthodox synagogue â€“ under-21s were firmly planted on the floor, while the adults staunchly occupied the second floor VIP balcony.

The division was starkly obvious as those on the second floor barely reacted during the Aoki set, but swiftly whipped out their smart phones for video capturing the moment Duran Duran came into view. The opposite happened on the floor, with a mass exodus following the two partiesâ€™ collaborative track (an Aoki remix of â€˜Hungry Like The Wolfâ€™), leaving the area half filled by the time Duran Duran was through its second song, â€˜Notorious.â€™ Then again, it was nigh on 10 PM and likely nearing their curfew so they can’t be faulted too harshly.

Much more review and photo after the jump! 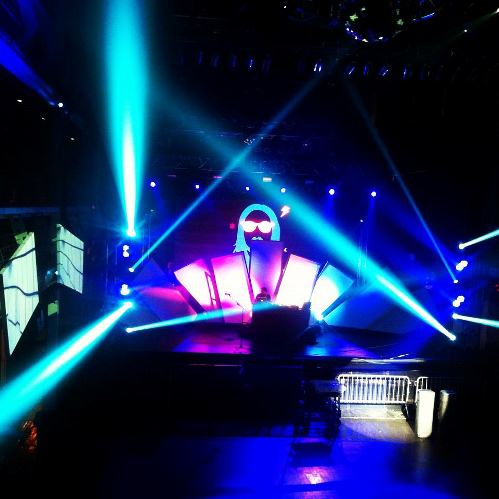 Socializing the two groups into one was clearly the objective of the evening, and as the Trident slogan â€˜See What Unfoldsâ€™ suggested, attendees were on track to experience an atypical show. Seeing Aoki and Duran Duran on stage together, playing a brand new remix was certainly awesome, but the mash-up needed to extend further, with more that appealed to both groups of fans. The future is on the horizon for genre blending, with others joining in, for example Hard Fest, which has live act Bloc Party headling a bill otherwise populated by electronic names.

Tridentâ€™s innovative approach and desire to appeal to various groups was commendable and cutting edge and it definitely takes guts to be a pioneer. Itâ€™s a very cool next frontier to imagine the collaborative forces that could work in tandem to deliver unheard of performances. In the future, appealing to both electronic and rock fans from the get-go would have led to a more diverse crowd that appreciated the entire show. I know at least 2 people (parental units) who would have been ecstatic to be in attendance at a free Duran Duran show, for a quick example.

That being said, Aoki brought his typical energy and THREE Dim Mak cakes that he smashed upon eager fans, even though his leaked rider notes only asks for two cakes per show (way to go above and beyond Terminal 5!) He played crowd tested favorites, including â€˜Turbulence,â€™ â€˜Time Warp,â€™ the Tommy Trash remix of â€˜Ladi Dadiâ€™ and his collaboration with TiÃ«sto â€˜Tornado,â€™ which set the floor afire but elicited only sporadic whoops from the balcony area. A highlight was the last track Aoki played prior to Duran Duran making their appearance, a new single with Angger Dimas and Iggy Azalea vocals entitled â€˜Beat Down.â€™ It was the crowning bass for Aoki, seducing the dancers into getting down.

Trident, thank you, letâ€™s see some more genres entering muddy waters. Can we put in requests for performances â€“ Swedish House Mafia and hologram Tupac anybody? Perhaps sigur rÃ³s and Adrian Lux? The possibilities are endlessâ€¦

NEWS: New York Times article on the Prodigies of EDM

Looks like after today your parents may recognize some of your favorite producers, as the New York Times has published a fantastic article spotlighting…