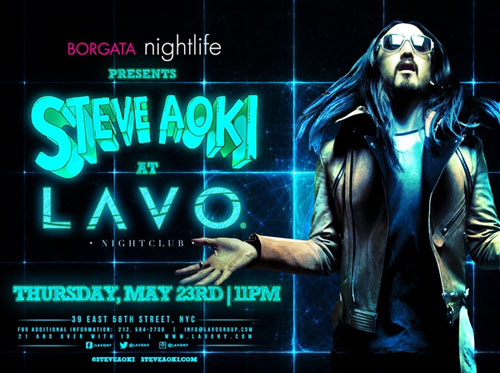 Steve Aoki has proven time and time again that he is one of the premiere DJ’s, businessmen and producers. However, Steve is not only these, but one of the foremost entertainers in the music industry. This past Thursday, Steve brought his trademark enthusiasm to Lavo Nightclub. This left an indelible impression on everyone in the nightclub that cannot soon be replicated.

We would be remiss if we did not properly acknowledge the venue which hosted this legend of the EDM scene. Lavo is located rein the heart of the city, near central park. Additionally, Lavo is clean, classy with a sense of elegance that very few nightclubs can match. Furthermore, like it’s sister club (the Marquee), Lavo allows for re-entry. This practice is absolutely wonderful, and it’s a total shame that this policy is not more widespread. All in all, Lavo is a phenomenal venue that we absolutely encourage you check out if you have an opportunity to.

Aoki took full advantage of the venue to put on an absolute thrill of a show. The variety of antics ensured that none were left dissatisfied. At one point he sent out a variety of women on a raft emblazoned with his name on it into the crowd to literally crowd surf. At another point during the night, Steve cut a cake with the words “Dim Mak” on it, quoting Rosseau as he shouted the infamous “Let them eat cake”. These antics did not detract from the show in the slightest. Far from it, if anything they only served to compound the tremendous musical performance Aoki put on.

This performance was indeed spectacular, Steve played five tracks off of his upcoming album. That’s not a typo, he actually did play the bulk of his new album. Of these new tracks, two were extremely notable. The first was another collaboration with Afrojack, entitled ‘Afroki’. This track seems to be following the trend of extremely good chemistry between Aoki and Afrojack and will be sure to be lighting up dance floors when it finally drops. This track is also the name of the new “supergroup” formed between the two, which will be sure to be good. The second notable track was another collaboration, this time with Knife Party. This track is a crossover between various genres of EDM, making it quite eclectic, and amazingly entertaining.

Steve also demonstrated what an excellent feel he has for the pulse of the EDM scene. He played new tracks such as Garmiani’s ‘Dance Motherfucker‘ and Martin Garrix’s upcoming ‘Animals‘. The crowd lapped these up with equal enthusiasm. This is extremely interesting because these are tracks that most people in that venue would have never heard. Kudos to Steve Aoki for introducing some non-mainstream tracks into his set, and doing so flawlessly.

But of course, the predominant reason that people go to see an artist is to see their hits. Aoki was clearly aware of that and delivered these in droves. Of course, as Steve is wont to do, these jumped all over the EDM spectrum. The zany ‘Turbulence‘ provided some extremely entertaining electro house. The titanic ‘No Beef‘ provided an infusion of progressive house into a chaotic set. ‘Warp‘ (which was an amalgamation of several of the versions) added a distinctly punk and harder vibe to set. Lastly, the absolutely monstrous ‘Pursuit Of Happiness‘ remix of Project X fame simply made the set.

Steve Aoki only made one stop this time around in New York city. This is a complete shame seeing as Aoki clearly showed everyone at Lavo that he is one of the best performers out there. We’ll be eagerly awaiting Steve’s return to the big apple. If you do happen to be in the pursuit of happiness, go see Steve Aoki at Lavo, it’ll be a night that you’ll never forget.

There are a few essential ID’s from last night’s Swedish House Mafia performance at Madison Square Garden. This would be one of them. Alex…