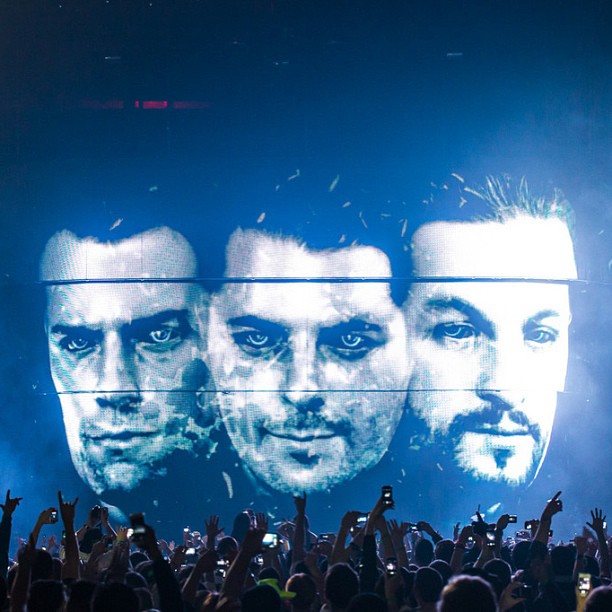 After conquering the Hammerstein Ballroom on Thursday night for the ‘Black Tie Rave’, and playing to a sold out Madison Square Garden crowd Friday, Swedish House Mafia’s ‘One Last Tour’ would make its way to the Barclays Center in Brooklyn. All 5 New York Shows sold out months ago, and tickets online were going for hundreds of dollars. Dance music fans across the globe wanted to catch Swedish House Mafia one last time in the worlds greatest city. ‘One Last Tour’ encompasses 53 shows spanning across the globe, which began in Dubai and is set to end at Ultra Music Festival in Miami. This is the trios last tour, and what better way then to have 5 epic shows on the last leg in New York City. In 2011 Swedish House Mafia became the first electronic act to headline — and sell out — New York’s Madison Square Garden. The trio made up of Steve Angello, Axwell, and Sebastian Ingrosso were about to embark on one of the best two hour emotional dance music sets in their history. They have accomplished so many feats since being formed in late 2008, creating hit tracks enjoyed by everyone in and outside of the dance music community. They have released ‘Leave The World Behind’ ‘One’, ‘Save The World’, ‘Greyhound’, and their latest mega hit ‘Don’t You Worry Child’. The three Swedes also have various individual accomplishments, creating tracks released on their own. Swedish House Mafia are one of the faces of dance music across the globe, and you knew they would leave it all out there at the Barclays Center.

Only the second dance music event at the Barclays center (Sensation USA), the energy in the building was emphatic. The brand new building is beautiful, well kept and boasted the pride of New York all around. Thousands in attendance, traveling from all over the world, not an empty seat in site. There were fans of all ages, from kids under 10 to middle aged couples, proving the power dance music has to bring all different types of people together. For many other genres of music you get a similar demographic at shows, but when it comes to EDM , its all one big family no matter who you are.

Pete Tong , known widely for his ‘Essential Mix’ and ‘Essential Selection’ on BBC radio 1 opened up the night for Swedish House Mafia. The global ambassador for electronic music got the crown nice and warmed up by playing many of today’s hottest tracks such as ‘The Code’ and ‘Hit It’. Pete Tong is a legend, and put on a perfect set for the crowd (many still arriving) at the Barclays Center.

The arena went dark, dazzling produced visuals lit up the white curtain on the stage, it was time for Swedish House Mafia to take the wrath. The curtain dropped, and the humongous booth beamed flashing white lights, igniting the crowd. Standing in front were Axwell, Sebastian Ingrosso, and Steve Angello. They had so much energy and received raucous cheers from the thousands in attendance. Opening with ‘ID’ + ‘Greyhound‘, the crowd was immediately immersed in what was about to be an unbelievable two hours. The visuals were astounding, just like the music video. The three faces of SHM lit up on the screen, with a roaring ovation from the crowd. ‘We Come. We Rave. We Love. lit up with a computerized voice boasting the quote along with the crowd following. This night was about to become one for the history books. 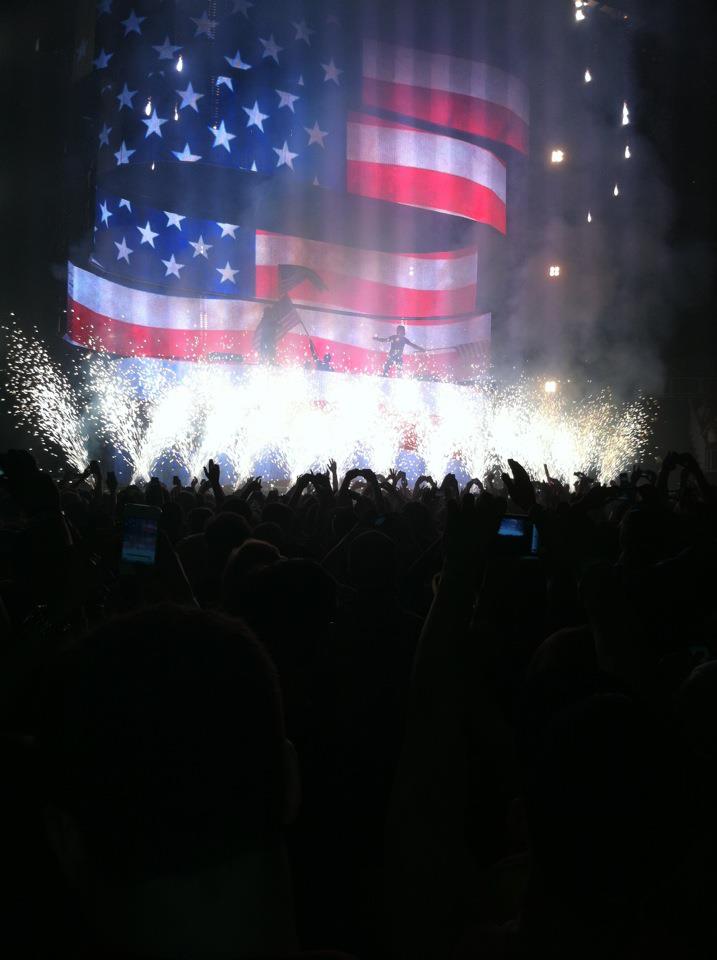 Dropping ‘Leave The World Behind’ with stunning visuals and lights to ‘Resurrection’ with the white curtain falling with the drop, along with fireworks and pyrotechnics there was not a dull moment in their set. The atmosphere and vibe in the building was absolutely incredible. It seemed as if every single track had its own unique light show to go along with the incredible sound system that the Barclays Center holds. A beautiful moment in the middle of the set was the projection of the American flag on the screen along with an unbelievable firework show to the Swedish House Mafia remix of ‘Every Tear Drop Is A Waterfall‘. All 3 members held their own American flags waving them back and forth, Angello thanking everyone for making the show possible, to go along with a feeling of unity coming from everyone in attendance.

Throughout the set, Swedish House Mafia played classics such as ‘Miami 2 Ibiza, ‘One’, and did an amazing mix transition from ‘Calling (Losing My Mind)’ into ‘Epic’ with a ridiculous light show to go along. Of course ‘Don’t You Worry Child’ was played with an eruption from the crowd and a beautiful singalong rocking the Barclay’s Center. Swedish House Mafia also played their individual songs such as ‘Together’ and ‘In My Mind’. The crowd also went into a mass dancing frenzy when ‘Antidote’ boomed out of the speakers. The closing was a beautiful experience, playing ‘Save the World’ and as they went off they played the ‘Don’t You Worry Child’ acoustic version. Angello started talking about the Mayan prophecy about the end of the world in 2012, and how we are still here now. He said someone had to
‘Save The World’ as the intro played on the speakers. It was Euphoric. The crowd cheered with a sense of satisfaction, and sang along louder than they had all night. It was the perfect way to end an unbelievable night.

Overall, ‘One Last Tour’ was more than just a show, it was an experience. It was a musical journey with an unbelievable light and sound experience. The production value was perfect, and the whole event was put together so well. This was a night that many in attendance would not forget, and the energy Swedish House Mafia brought made you feel like you were watching long time friends on the state. ‘We Came.We Raved.We Loved.’

Hot damn! Now this is my kind of a sound. One of my personal Swedish favorites. John Dahlback has a classic way of creating…