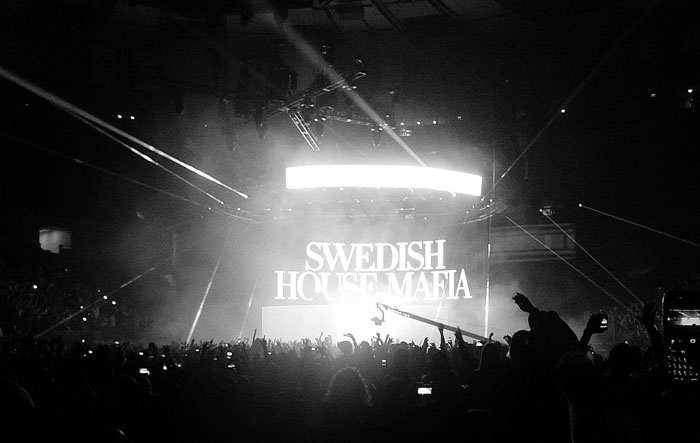 It has taken us until now to fully recover and reflect upon the massive event that was Swedish House Mafiaâ€™s takeover of New York City that commenced Friday night at legendary Madison Square Garden and continued as the sun came up Saturday morning at Roseland Ballroom.

After months of preparation, Axwell, Steve Angello and Sebastian Ingrosso brought Swedish House Mafia to life for thousands of fans that had likely never experienced anything of such epic proportions. As Friday came upon us the hype rivaled anything that we have ever seen in the lead-up to a show. Even three-day events such as Electric Zoo did not same garner nearly the same level of anticipation. If EDM stays on the exponential growth curve that it has been traveling on of late, we can only hope to see members of the top flight of electronic artists such, as SHM and TiÃ«sto, grace NYC more regularly.

That being said, SHMâ€™s sophomore visit to NYC came with great expectations that were not only met, but also exceeded. Despite fears that MSG would not be a suitable venue for an electronic group, the trio had everyone in attendance riveted by a series of private edit tracks that had previously never faced the public light of day. A similar set fell upon the ears of Roseland attendees, to no less success.

Some of our favorites included Tommy Trash â€“ The End, Youâ€™ve Got The Love â€“ Florence and The Machine (Mark Knight Remix) and Swedish House Mafia â€“ One spliced together so seamlessly that fans not well versed in EDM could have easily mistaken it for a single track. Another notable edit wove together the classic Daft Punk â€“ Aerodynamic with arguably one of the yearâ€™s best known vocal tracks, Diddy, Dirty Money feat. Skylar Grey â€“ Coming Home (Dirty South Remix) with Hard Rock Sofa â€“ Quasar.

Swedish House Mafia- One vs. Florence & The Machine- You’ve Got The Love vs. Tommy Trash- The End

SHM played fair bill to EDM artists from across the global spectrum, dropping tracks from Adrian Lux, Alesso, Deniz Koyu, John Dahlback, Swanky Tunes and Tommy Trash, to name just a few. The very breadth of the selections was enough to create a dazzling performance, which was only augmented by the electricity that sparks between the three members as they work together.

A notable variance between the two sets was the absence of the live vocalists Tinie Tempah and John Martin, who lent their talents to SHM productions Miami 2 Ibiza and Save The World Tonight, respectively. This did not stop the SHM members from riling exuberance from the crowd via booth hops and impassioned synchronized movement.

A proper meditation upon the evening would not be complete without nods to the talented supporting acts, which warmed the crowd at MSG prior to SHMâ€™s arrival, and sandwiched the trio between comforting sets at Roseland. French DJ Jacques lu Cont and NYCâ€™s A â€“ Trak easily navigated the overwhelming size of MSG to the crowdâ€™s pleasure. Carl Kennedy started and ended the night at Roseland, with Jacques lu Cont doing double duty, leading in for SHM, who were followed by AN21 and Max Vangeli, whom Angello showed love and support by joining during their set.

Despite the snafus that preceded SHMâ€™s arrival in NYC, including muffed ticket sales, day of execution was nearly flawless. From MSGâ€™s pleasant atmosphere to the ease of the will call at Roseland, we were delightfully impressed by the production and smoothness of the SHM experience. Now we can only ask for more, epic events of this nature in the near future.

Coming off their big debut gig on New Years Eve, Hyperbits is releasing episode 4 of the Hypermix, which features some of their favorite…