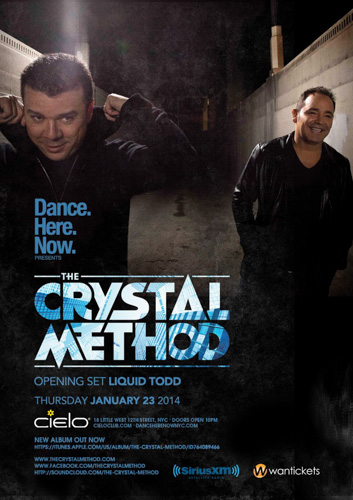 When you think of a duo like The Crystal Method, the first venue that comes to mind may not be Cielo. Cielo is known for its deep house and techno nights, especially their Dance.Here.Now. Thursdays, which left many regulars confused about the mood set by opening DJ Liquid Todd. EDM like Knife Party, Deadmau5, and Arty fed the energy of the crowd at the start of the night. There were some old-schoolers there who had never been to the club before. One girl in printed tights brought a rainbow LED hoop that was passed around throughout the night to anyone willing to try their hand at hooping antics. Perhaps the bitter cold night contributed, but it wasn’t as packed as usual. That being said, those who did make it out put on a great show and The Crystal Method was full of infectious energy from the beginning.

The MC started off their set by mentioning Scott Kirkland’s recent recovery from brain surgery and set the mood for the rest of the night as one of celebration. The two were clearly pumped to be back behind the decks and playing music for an adoring crowd. They opened with a remix of ‘Over It’ that showed how the slow song can be transformed into one that moves dancefloors, and then moved into real breakbeat sounds. For such intense periods of music, you need more spaces for quiet rest. This set moved in highs and lows, while maintaining a continual build into a genre that has, so far, not reached the mainstream. Breakbeat uses a variety of drum patterns and rhythms and at times, the set felt more like a rock concert, a rock concert you can dance at. The highlight of the night was when the duo dropped their 1997 hit ‘Busy Child,’ a chaotic, aggressive track that really moved the whole night to the next level. The one track we would have loved to hear was their collaboration with rock band Filter, ‘Trip Like I Do,’ but the the two only spun until about 2:30am and played less rock-oriented tracks. There was plenty of room to dance, with people showing off their moves and getting to the real heart of Cielo.

Overall, we think The Crystal Method could have done better at a dedicated concert hall like Hammerstein or Roseland, where fans could buy tickets in advance and have an idea of what the night would entail. That would also have allowed them to use guitars and drums to enhance their sound. But they still rocked Cielo and put their stand-alone tracks together with unusual tweaks to make them suitable for a DJ set.

Their new self-titled album is out now, and we highly suggest checking it out. Read our review of the album here to get a taste.

Love him or hate him, few producers have been able to carve out their own niche the way Wolfgang Gartner has. Although his â€˜Weekend…