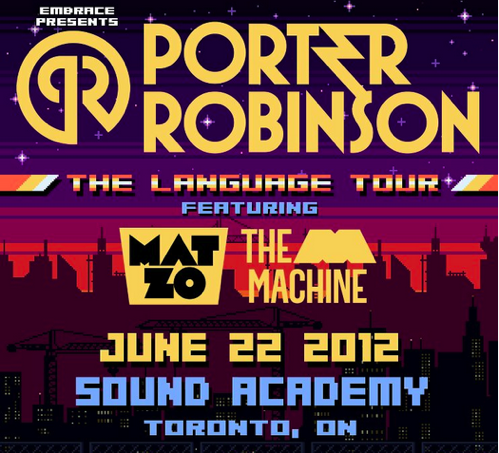 This past weekend saw The Language Tour touch down in Toronto, with young guns Porter Robinson, Mat Zo and The M Machine bringing their 8-bit warrior routine north of the border. Already a third through the 30+ show tour, the night kicked off at Sound Academy with The M Machine, where they connected their illuminated â€˜Mâ€™ to the pounding synths familiar to Metropolis Pt. 1. Each song from the San Francisco trio tells a story (see: amazing liner notes), and their live show was no different, ending their set with the powerful track ‘Shadow in the Rose Garden.’

Next up was the British whiz Mat Zo, another prodigy from the Anjunabeats family. Itâ€™s hard to predict how a Zo set will unfold – his live productions range from big room house to creative mash-ups to his own variant of groove trance. And his episode from Toronto had all three – from his own funky progressive productions like ‘Superman’ and ‘Yoyo Ma’, to the kind of crowd-familiar bangers like ‘Kick Out The Epic Motherf*cker,’ as far as the marching trance of Orjan Nilsenâ€™s ‘Viking.’ At times, the crowdâ€™s readiness to rage left long, groovy lead-ins a bit out of place – the track suit clad Zo was completely hypnotized by his own music. However some of the most intriguing pieces came from customized mash-ups. The mix of Itâ€™s Yours in the background of the trademark naked drums of Nicky Romeroâ€™s Green Flash remix was a perfect blend of Mat Zo trademark sound with a party warm-up for Porter.

Much more after the jump!

Porter Robinsonâ€™s set started with the track that put his name on EDMâ€™s radar, ‘Say My Name.’ With his quick mixing style, he jumped from a recently-released electro edit of Bass Cannon right into the Chuckie smash ‘Who Is Ready To Jump.’ Needless to say the crowd were on their feet – at times there were hardly any breaks from the thrashing, tech-y drops of Porterâ€™s sound.

httpv://www.youtube.com/watch?v=ZGbyTEb7cY8
With tracks from his Spitfire EP, as well as trademark remixes and bootlegs, the 19-year old continued to bring the noise. Notable tracks included a throwback to Seventeen Years by Ratatat mixed into R3hab’s remix of ‘Without You.’ After a myriad of unfamiliar edits, he ended with his tour signature Language, a beautiful track that seemed to go somewhat unappreciated by the raving masses.

All in all, a solid performance from all three, and we know that more crowds, clubs, and festivals under their belts will only be a good thing for these teenage sensations. Needless to say the Language Tour is a preview to the titans of EDM 2.0, a progressive sound that will hopefully evolve a generation along with it.

Deadmau5 wishes us all a Merry Christmas in the form of a free download of his classic collaboartion with Kaskade I Remember, which he…