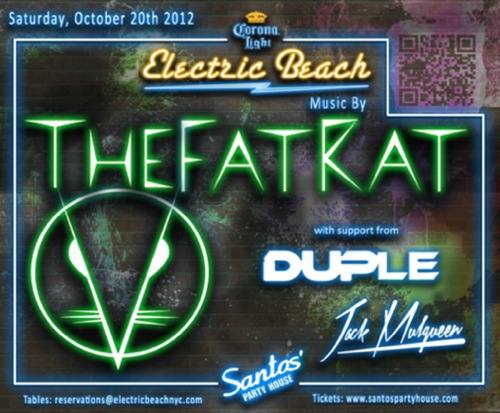 NYC welcomed TheFatRat with open arms this weekend as the man man of glitchy electro house made his debut here at Santos Party House’s weekly Electric Beach party. Best known for his bouncy, happy electro disco hybrid, TheFatRat made a name for himself earlier this year with a fun remix of ‘Levels’ (RIP) and since then has offered up an expansive list of equally compelling remixes and original mash-ups. An appreciable fact about TheFatRat is his knack for well placing his wobbles, but maintaining the track’s original melody.


Electric Beach recently celebrated its one year anniversary with a rare club appearance by Anjunabeats rising star Mat Zo, and the talent the party is pulling in has consistently been impressive and TheFatRat’s debut was no exception. Santos is perennially packed on Saturday nights with a mix of fans and enthusiastic partiers alike, cheerfully outfitted with glow necklaces and pulsating light sticks.

TheFatRat struck a striking figure, bopping and grooving all night long to his eclectic and funky track selection and the crowd followed in kind. His infectious energy enveloped the room for the entirety of his set, which was comprised of an amalgamation of both his own tracks and choice others. With his signature chops and breaks infusing and informing his set, we couldn’t help but engage in a guilty sing-a-long to his remix of Chris Brown’s ‘Don’t Wake Me Up.’ Full disclosure – the sing-a-long has continued ever since the show. We were also happy to hear the first track that brought TheFatRat to our attention, his undeniably excellent remix of Foster The People’s ‘Don’t Stop,’ which also inspired lyric murmuring in a less guilty fashion than anything related to Chris Brown – sorry RiRi!

In general, TheFatRat kept the atmosphere light and the music bubbly, exactly what the crowd wanted and what he is known for. His blend of disco and electro house never disappoints. It’s always heartening to see a dedicated fan base support a favorite artist, and this was certainly the case Saturday night for TheFatRat’s first NYC show. Let’s hope to see him back here stat.

Check out the effects in this video for Skrillex’s tune ‘First of the Year (Equinox)’. The whole concept of this little girl dominating this…