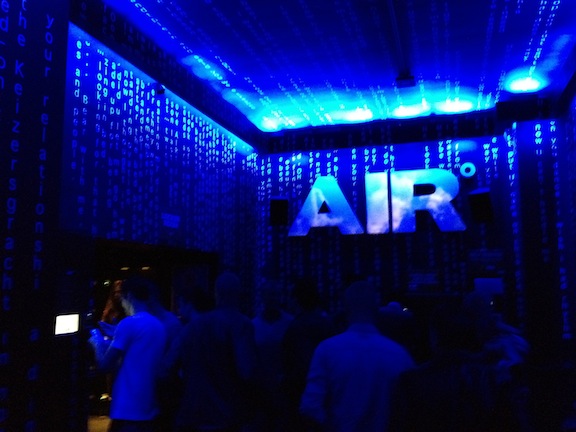 We often interview DJ/producers and pose to them the question of how playing a set in New York compares with other locations around the world. A sentiment shared amongst many dance music fans across the globe is often how similar or different the experience of seeing an electronic act can be in a location that they don’t call ‘home.’ In particular, outside of our own country. This past Saturday, I was able to experience that first hand at Air nightclub in Amsterdam.

From the get go it was of the utmost importance for me to get a comparative in these particular aspects of the evening: venueÂ aesthetic, sound quality, crowd type, and variance in set. Taking it all in with a somewhat clear mind was probably the most difficult given the excess of what Amsterdam presents to its visitors.After attending shows in both Prague and Berlin over the past week with no name local acts, it was time to tackle a big name club with a big name DJ at the helm.

Upon entering Air, it was no different than anything else one might find in a club in the states, a generic darkened entry with dudes who may be best at looking big as security, attractive women and pretentious “well to do’s” work the entry to see if you’re on the list (so far no different). However, I was next directed to a card access area where you pay 20 Euro for a card that allows you to buy drinks and are entitled to add as much as you’d like, unique and different, it’d be hard to support this concept in the states since bartenders rely so heavily on tips.

After making my way inside the club I was greeted by this life size zebra: 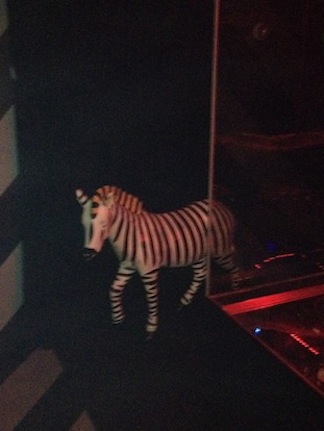 not a real zebra.

Not entirely sure what concept they were going for but from there the club had several levels providing platforms to allow people to have excellent views while providing a spacious yet intimate atmosphere, definitely a challenging element in any club. The top half of the walls had all black background that featured digi LED lighting, providing some subtle but cool color tones. I’m sure the lights would have been more impressive had their not been a surge in the latest and greatest in LED technology over the past year.

Important for any true concert attendee, the sound did not disappoint. The highs and lows were all pretty damn good and from bathroom to deckside; no real complaints and the volume was never too overwhelming. Â They had a unique decibel meter that found itself going higher and higher as the night went on where I was not entirely sure if it was legit or if it just acted like a crowd meter at a sporting event. 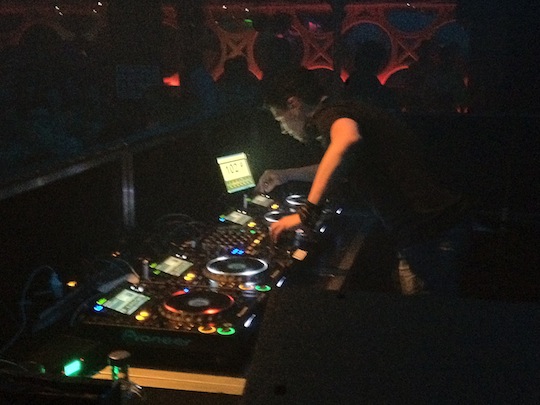 Leroy Styles, who opened for Thomas Gold, Â is known as a groove and funk infused DJ who delivered several Mau5 track and played songs I didn’t expect after doing some minimal research. I was curious to see if Mr. Gold would adapt and do a bit of the same [change his set based on the crowd], or stick close to what we as fans in the NYC are often graced with. Thomas in fact did stray from his norm, unfortunately in a way that many who know the German for his epic live set, would have been gravely disappointed. This is not to say that Thomas didn’t seamless infuse the tunes and present them in a skillful way its just that we were presented with a festival length set that would appeal to someone who saw their first ever electronic show and who’s favorite artists might include Flo Rida and Katy Perry. After assessing it further and briefly interviewing show attendees, it was brought to my attention that most of the crowd had no idea who Thomas even was.

Although the audience seemed to enjoy the performance, perhaps there were those who like me, were hoping to see a true Thomas Gold set that doesn’t feature an ‘Atom’ vs ‘Leave The World Behind’ vs ‘Calabria 2007’ mashup.

All and all it was a bit of a letdown, perhaps my expectations were a bit higher, as Berlin’s minimal based Tresor provided more of a culture shock with minimal tech that I rarely find in a major club back here in the states (you can definitely find these types of shows here though, don’t get me wrong). His set length was only a bit longer than an hour and a half, which unless at a festival, would have had any diehard up in arms.

An experience like this helped me draw several conclusions from shows outside our country. First and foremost, other countries have a fanbase who is just as uneducated about electronic dance music. Not knowing someone like Thomas Gold shows you don’t know a whole lot about this type of music and that electronic pop music will be just fine for those people. Fortunately no one asked Thomas to play ‘Call Me Maybe’. On the positive side of things, the European fan base does not seem as bottle service driven, a culture that has overtaken most of NYC’s scene. I also believe that those in the know here may in fact know more about this particular genre of music than on the other side of the Atlantic, granted this may vary from genre to genre.

Second, a successful DJ will vary his set in order to appeal to the mass. Thomas must have known something I didn’t know because hearing tracks like the one’s from the video above along with, ‘Pacha On Acid’, ‘Le7els’ :(, ‘Give Me Everything Remix’, ‘Greyhound’, and ‘Save The World’ were a bit surprising, not that some were played, but that tunes like these encapsulated the entire hour and a half long set. From country to country, the scene is not all that different, I think it in all honesty comes down to the environment in which you’re seeing the performance and the artists who are in fact performing.