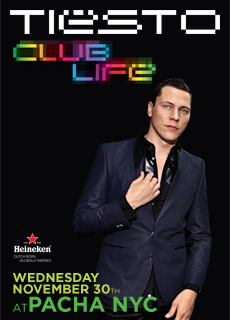 If youâ€™ve been in NYC for the past two months, chances are you had heard that TiÃ«sto would be landing at Pacha Nov. 30 to be a part of its 6-year anniversary party series. One of the biggest DJs in the world, TiÃ«sto’s show at Pacha last Wednesday marked his first time every gracing the decks at the international megaclub. I had been looking forward to this show and he didnâ€™t disappoint. Felix Cartal came on prior to TiÃ«sto, also making his Pacha debut, and it was awesome. Both DJs havenâ€™t been in NYC since Labor Day Weekendâ€™s Electric Zoo, and the crowd was certainly anticipatory for both of their returns.

Felix Cartal surprised everyone by playing his new single Donâ€™t Turn On the Lights with live accompaniment by the vocalist on the track, Polina, who came in specially just for the evening. He more than amply prepared the revelers for the main act of the night.

Some people may say that TiÃ«sto is not the best performer, but I really admire his versatility and enduring allure. Originally a Dutch tranceman by nature, he has evolved nicely to fit into the prevailing currents of EDM. He wasted no time in dropping his new club banger, Maximal Crazy, onto the expectant ravers, and everyone went totally insane. Another notable track he dropped was a new mashup of Calvin Harris – â€œFeel So Closeâ€ vs. Alesso â€“ â€œRaise Your Head.â€ TiÃ«sto nicely wove in new and old tracks, both his and others, to create a cohesive set that everyone enjoyed immensely. Canâ€™t wait for him to return!!

What a crazy week this has been! And to add to the fun how about this preview remix of LMFAO’s ‘Champagne Showers’ by Dimitri…