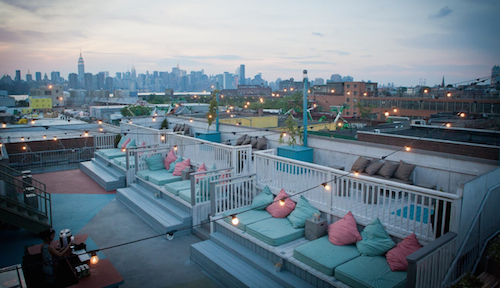 Two weeks ago Saturday, the folks of NYC were fortunate to be treated to a sunny and comfortable afternoon, prime weather to dance off into the sunset.

The Output crowd grooved to an early set that featured the members of the Kaviar Disco Club, playing both b2b as well as taking to the decks on their own.

With the sun almost gone, The Juan Maclean took over and provided the crowd with an extra pop in their step. Maclean got the crowd going with some summer 2014 favorites, Sidney Charles’ Ruffline, Banton’s ‘How You Gonna Treat Me’ and Detroit Swindle’s, Sometimes. The Juan Maclean  also brought in a few of his new originals including ‘Get Down (With My Love)’ and wrapped the evening in proper fashion, allowing Bill Withers to confirm we’d just had a ‘Lovely Day’.

Being part of such a good time had me committed to back to back Saturday’s. This time to catch Cyril Hahn for another music filled Saturday afternoon.

After releasing his infamous remix of Destiny’s Child – Say My Name, the buzz around Cyril Hahn began to build, as did his sensual deep driven remixes. Hahn has since dropped several original tracks creating quite a packed crowd for an overcast day. ‘

Dark Disco kicked things of with Mess Kid and then had EZRAKH, who played both before and after Cyril Hahn. Once he got behind the booth, you could sense some added energy as people patiently awaited some of his biggest hits as well as some of his oft played remixes. He opened things up with his remix of Mariah Carey’s ‘Touch My Body’.

It’s hard to have a bad time when you’re at 74 Wythe Ave but when you’re on their rooftop for a day party its near impossible not to be filled with joy.