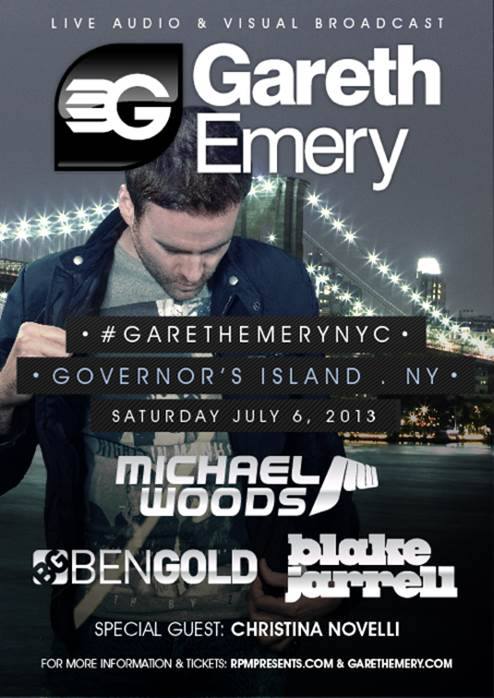 The waves lapped gently at the shores of Governor’s Island, the freshly cleaned sand lay virtually untouched inside the beach club. The third day of RPM’s IndepenDance weekend was on the horizon and famed English producer and DJ Gareth Emery was set to make it a night for the history books. Things ran a little smoother on Saturday then they did the previous Thursday as the staff of the beach club learned how to deal with the raucous crowds that RPM gathered, raised on the dance floors of Pacha. There was a lot of support and a whole second stage but the real attention was on the on the main stage, and frankly, we think the speakers spent on that stage might be better used to ensure that the the sound reaches the far edges of the sand. Overall though we want to reiterate that there are few venues in this country like Governor’s Land and rarely do we get to dance in the shadow of downtown Manhattan. We’re excited for the other events RPM, Made and others are gonna put on. Hell, if we weren’t going to be at EZoo we’d hit up the Unicycle Festival. Okay, well, maybe not that, but you get the picture.

As we disembarked the ferry we rolled up to sounds of Ben Gold warming up a crowd for Gareth Emery for his second year in a row. A fellow Englishmen, Gold has years of experience belied by his boyish good looks. The guy has been DJing for years in places every bedroom producer dreams of playing in. Ibiza to America he’s hit up hot spots all over the world making his own brand of progressive, trance-ish music. You can’t pigeonhole the man though because like his headliner-homie Gareth, he just likes playing good records. Some of those good records were big tracks by big names like “Thunder” from W&W, and mashing up “Thing Called Love” with Hardwell’s “Spaceman”. Of course though he mixed it up with some up and coming tracks like Alexander Popov’s “Moscow Subway”. Gold did a phenomenal job at balancing his set, keeping the people moving but not wearing them out and getting a whole bunch of “Who is this guy?!” questions from an enraptured crowd.

The star of the night, Gareth Emery, took to the stage amidst the notes of young gun Arston’s track “Zodiac” and proceeded to show the huddled masses in sight of Lady Liberty that they were free to party. Emery displayed a masterful command of the beach club, perhaps aided by experience from the year before. He played enough of the EDM world’s current big tunes to keep the fairly casual audience Governor’s Island brings out dancing and singing. You could hear though he really knew who his audience was because his set was a lot of hard hitting electro and trance with some of his own classics like “Concrete Angel” (which he played into the RL Grime mix of “Satisfaction”) and “The Saga” as well some newer tracks like his collab with Krewella “Lights and Thunder”. He kept the feet moving and the mood light eliciting some laughs and yells when he dropped “Sandstorm” always making the island feel like a party.

Though there was a bit of an exodus to the ferry’s when Emery’s set ended; the open spots closer to the stage were fast filled with those still hungry for the pulse pounding electro they knew Woods would feed them. The third Englishman of the night happily obliged opening with an intense mix of “Who” and shortly after mixed Kaskade’s new jam “Atmosphere” with Nicky Romero’s “Symphonica”. Woods played a set filled with bass heavy tunes that would sound right at home in Pacha and matched the darkened skies outside the tent.

This show was a lot of fun but the sound quality, or lack thereof at the Beach Club is simply impossible to ignore. The bass was minimal and the volume was low. The thing about this music is that the show is the sound. They’re not playing instruments, or jamming. Their performance is their song selection and when the system just isn’t up to par, it brings down the experience. Fortunately there were a lot of redeeming qualities. RPM brought an incredible roster of DJ’s to New York City over four days and I’m sure the staff at the Governor’s Island Beach Club was just as exhausted as the kids dancing on the other side of the barricade. Different DJ’s in different genre’s on different days, and they even had a second stage to show off smaller and often local talent. It’s a beautiful venue too as those venues where you get to see the sunset over the skyline of Manhattan are few and far between. If you get a chance to see a show there, like R3hab this Saturday, take it. It’s worth it.