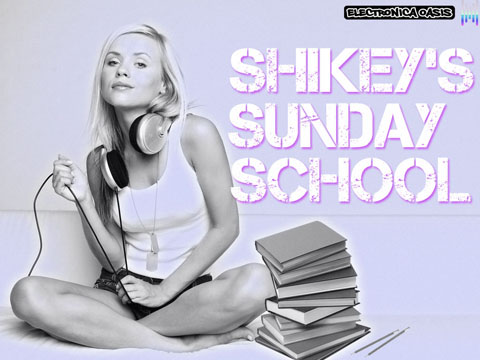 Gather ’round kids, it’s time for a little lesson in music. For the casual fan of the fine beats posted here on EO, it is easy to get confused by the constant mention of different genres, drops, synths, or any other “technical” jargon we often use.

Well have no fear, for I bring you, Shikey’s Sunday School. Each week, or maybe every other week, I’ll do my best (along with the shawty above) to shed some light on this EDM terminology and help the less informed understand all things EDM; like why tech house isn’t the same as progressive house or what a bootleg remix is. But for our first lesson we dive into the roots of where this all began with a brief overview of EDM itself. Special shout out to our friend Tina Lighting at TinaCast Music for helping spark this idea! The lesson begins after the jump!

The history of Electronic Dance Music (EDM) is more robust here in the USA than most would think. Those who have seen ‘The History of House,’ posted last winter, understand that the EDM scene sprouted its roots in 1980â€™s Chicago as disco music was dying. House, the original genre, has become accepted as the all-encompassing term for EDM, but there is so much more than one name can encapsulate (the all knowing Wikipedia lists over 200 genres under the EDM umbrella!).

The epicenter of this musical revolution was Chicago’s infamous, Warehouse nightclub. Driven by music director DJ Freddy Knuckles willingness to experiment away from the typical R’n’B and Disco tracks, house music first found its way to the public. As Warehouse grew in popularity, so did the music played there, causing local record shops to begin declaring “We sell house,” in reference to the music played at the legendary club. Thus the name of the genre was born, and quickly began to infiltrate the rest of the city.

One of the biggest differentiating features of house music is the “four-on-the-floor” drumbeat that can be found across all of EDM. Previously, such a use of the kickdrum was only found in disco music, but had always succeeded in making people get up and dance. The phrase refers to the driving drumbeat hitting on each note as opposed to every other note as seen in most rock songs, or to put it in simpler terms, the “untz untz untz” that makes you want to fist pump.

Early groundbreaking tracks like Adonisâ€™ â€˜No Way Backâ€™ and â€˜Can You Feel Itâ€™ by Larry Heard employed this drum technique and laid the foundation for the beloved bangers blaring out to the masses today. But the track that really brought house to the rest of the US and beyond, was Marshall Jefferson’s ‘Move Your Body.’ Jefferson’s record was subsequently dubbed the ‘House Music Anthem’ and still enjoys success, most recently being featured in Rockstar Games’ Grand Theft Auto: San Andreas.

As polarizing as EDM can be, it is actually dominating the Top 40 charts and beyond. Top producers are collaborating, more so now than ever before, with pop mega stars like Rhianna (‘We Found Love’ feat. Calvin Harris), Pitbull (‘Give Me Everything’ feat. Afrojack), Nicki Minaj & Flo Rida (‘Where Them Girls At’ feat. David Guetta) and more.

Like it or not, EDM has come too far to be going away any time soon and will only continue to evolve. Of course all of this is just a small piece of how the last 30+ years have come to be, but hopefully shed some light on the music that keps you dancing.

So there you have it, lesson one complete. Comment (and like!) below on what you want to learn about next time or any questions you have!

So for the big Halloween weekend coming up we decided to throw together a nice little Halloween playlist for ya. Clever right?! K, anyway,…